“No rating cliff edge but be cautious” - M N Ingham

The ratings decisions by S&P and Moody’s tells us that which we already knew. S&P has been particularly forthright this past couple of years about its concerns and what the South African Government needs to do. So, if you don’t listen to sound advice you get a smack; markets can reward but when they punish it is painful. Government is already paying more to borrow. Markets have been pricing in creep in fiscal slippage, so ratings agency views tend to be a lagging indicator. In exposure to banks, the shorter-term concern is the ANC elective conference, the great unknown and the potential trigger for asset price weakening. Keep your powder dry, bank small gains and take small losses on the chin in a market where sentiment is brittle.

“No rating cliff edge but be cautious”

On Friday, 24 November, both S&P and Moody’s made their latest judgement calls on South Africa’s sovereign credit rating. These are rarely cliff edge events, notwithstanding the media drama surrounding the decisions. After all, going bust happens gradually.

Credit assessment is a journey by ratings’ agencies, not a one-time event, and there is a fairly clear line of sight on where their thinking is headed. S&P has been sending out powerful smoke signals for months now. The full ratings announcements carry a host of dry detail and analysis, none of which are especially encouraging reading.

Moody’s placed South Africa on review and S&P again lowered the rating, this time to sub-investment grade for both. This has largely been priced in, hence the currency and long bonds rallying after the ratings news.

Credit ratings do not indicate investment merit but rather credit risk. Ratings express an opinion about the ability and willingness of an issuer to meet its financial obligations in full and on time. Credit ratings also address credit quality and the relative likelihood that the issuer may default.

What is interesting about this increase in foreign-owned domestic debt is that South Africa has been losing the investors it would prefer to have, as they have sailed too close to their investment grade mandates and sold out. The composition of debt ownership has been changing and increasing, with yield-seekers with a head for heights replacing the conservative holders.

This liquidity is useful and in theory makes for keener pricing. But the R186 10-year bond has still risen, and at 9,2% at the time of writing 80 basis points higher than two months ago.

A me-too Zuma for next president would send rates higher still if sentiment is more negative than yield greed. A sell-off on the rand and a rise in developed market rates would also place further downside pressure on pricing, with the converse a higher yield.

Short rates have edged down by 0,25% since 21 July but the scope for further easing is muted. The drop in the repo rate was more indicative of the Reserve Bank’s concerns over political and economic problems.

Meantime, three-year earnings growth on banks is barely in line with nominal GDP and there is the threat of credit quality deteriorating and higher impairments. Credit extension metrics are largely in reverse. Banks are reluctant to lend, borrowers are hesitant.

The medium-term consequences of ongoing fiscal slippage and crowding out by government of the private sector are real economic concerns, let alone the political unknowns. These factors limit the scope for banks to grow; expenses are sticky, so future earnings are vulnerable.

Prescribed asset requirements, last used by the Nationalist government, would be damaging to sentiment if it was mooted and institutionally damaging if put in place.

Rising interest rates have a positive endowment effect on banks’ capital and funding as assets reprice a bit more than liabilities. When interest rates decrease, the reverse happens. A 1% fall in the repo would decrease net interest income by around 3%. The 0,25% reduction in the repo last July has a small negative effect on earnings, assuming non-performing loans as a percentage of advances are unchanged. However, the earnings impact can be offset by reduced credit default risk in future.

I have proved previously that over the past twenty years, share prices of the big four banks tend to rise by a higher amount in lowering interest rate cycles but achieve temporary excess performance over the All Share Index in a rising rate cycle.

A 0,25% decrease in the repo would have a small positive valuation effect for banks if the long bond rate reacted to the move proportionately, with the yield falling and the price rising. The relative resilience of bank share prices, which have been range-bound since late July, would in part be explained by this as the R186 yield eased back to under 8,4% at one point.

Now, we have long rates rising, which is share price negative for banks if this trend persists, as seems likely, not least with rates in advanced countries firming slightly this past few months.

The banks have and will remain sensitive to fluctuations in long bond yields, with which bank share prices have an inverse relationship. 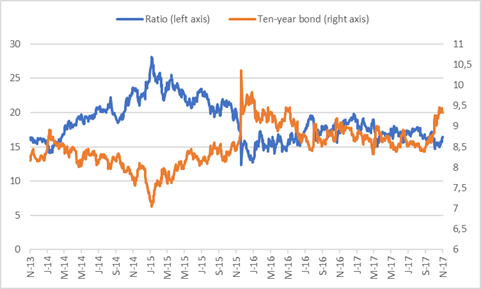 The share prices of the big four banks have been largely range bound but could be vulnerable to further political shocks and external factors, including foreign shareholders and bond investors heading for the hills.

FirstRand remains the favourite of overseas managers and its share price remains the stronger on a relative basis. If I remove RMB Holdings, Remgro and BEE shareholders, foreigners hold 45% of the free float and 54% if I further exclude PIC. But if foreigners decide to reduce their exposure this large share of free float could undermine the price as South African funds are largely at weight and not natural buyers. 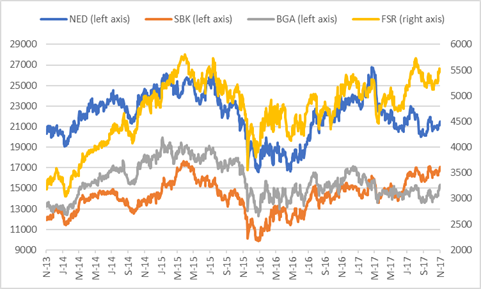 Banks do offer relatively good dividend yield but there is a reason for that. Earnings growth is likely to be tepid and credit deterioration is possible, undermining earnings further.

The aggregate forward dividend yield is 5,9% with Barclays Africa Group offering a forward yield of 7,3%, Nedbank 6,1%, and Standard 5,2%. FirstRand has a lower forward yield of 5,1%. Price to book ratios are relatively attractive, averaging 1,8x with FirstRand at a premium rating of 2,7x.

Forecasts and valuation metrics for the big four banks

Following the S&P and Moody’s ratings verdicts, banks prices have rallied. However, banks remain vulnerable to economic difficulties, movements in bond yields, and problematic politics. Bond yields remain more attractive in the short term, hence the appeal for foreigners and the increased holding by foreigners, even as the composition of the holdings has shifted since last year as the fiscal situation deteriorated. Rallies are an opportunity to take money off the table from a trading point of view. There is no room for complacency, not least when exposed CFD to banks.