I’ve had a Sell recommendation on Woolworths for some time. That is unchanged.

In a retail roundup dated 26 September 2014, I advised that “Woolies has its hands full with its empire building and the best growth – at least in the share price – is behind it for now”.

A few months ago, I wrote the following: “In South Africa, Woolies is close to or at its medium term operating return objectives. Food margin has gone from 4% in 2010 to 7,3% in 2016 and their pricing is now increasingly uncompetitive in food - both Checkers and Pick n Pay see this as an opportunity. A sign of this is that Woolies is muscling in on suppliers to “invest in price”.

Well, a competitor can take advantage of this on two fronts – keep suppliers on side and keep the shelf price lower than the Woolies equivalent, whilst matching quality and supply chain freshness.

Food has become increasingly important for Woolworths South African profitability at 41% of the total. This is coming under increasing pressure.

The last number of months have seen some interesting developments in food retailing with Pick n Pay and Checkers upping their game in targeting higher LSM shoppers for whom fresh, convenience and added-value foods are in demand. Both grocers have proven credentials lower down the LSM spectrum but have been outgunned by Woolies at the higher end with its “Marks & Spencer” type food offering.

The margin differential between a Checkers and Woolworths Foods captures the scope for growth.

Shoprite reports an aggregate trading margin of 6% in its South African supermarkets. But this includes a large line item called other operating income – which includes finance income, premiums, operating lease income, commissions, and sundry. This line item exceeds R3,5 billion a year. If I adjust that, I get a true grocery margin closer to 3,5% which is in line with Spar but higher than Pick n Pay.

This means that Shoprite can use Checkers as its LSM 10 attack dog, probably earning a better margin in this niche than over the entire basket but leaving ample room to undercut Woolies Foods.

Clothing and General Merchandise was worse than Foods – turnover growth slowed in the last reported six months from 12,5% to 3,5% and profit growth slowed from 14,6% to minus 4,7% with the margin falling by 1,4%.

Australia is at best in a holding pattern. David Jones was down 0,5% in local currency in the six months to December with margin maintained at 8,5% but store costs grew 2,4%. Country Road isn’t getting anywhere with sales down 0,2% and profits down 16,4% in Australian dollar. Sticky expenses, up 2,3%, and higher cost of sales, up 1%, means margin takes a hit – down 1,9% to 9,9%.

As I’ve demonstrated previously, not least in relation to Massmart, a slowing topline has a disproportionately negative impact on profitability.

Australia remains an uncertain and challenging market for Woolworths. Executive management attention has to be diverted between two distinct geographies, South Africa and Australia, each with its own difficulties and peculiarities. Australia is now 44% of sales and 42% of operating profit. Amazon’s online entry to that market also adds a new competitive dynamic.

Earnings in rand for the first six months of F2017 were down 1,9% with adjusted EPS down 2,5% due to some dilution remaining from the R10 billion rights offer to part-fund the David Jones acquisition. The dividend was unchanged at 133 cents.

I anticipate a weaker second half with my forecast for adjusted EPS to be down by 7,6% to 422 cents from 456,6 cents in F2016. The final dividend is also forecast to be lower at 156 cents versus 180 cents last year. The annual dividend is estimated at 289 cents versus 313 cents last year. Three-year EPS compound growth is estimated at less than 2%.

The next newsflow event is a trading update in mid-July and it could well be disappointing. Full year results are due toward the back end of August. In view of the weakening business fundamentals the stock is vulnerable.

I’d be disinclined to deploy fresh money to Woolies now. The stock is roughly 40% off its highs but that does not mean it is a great buy. There has been a steady derating but even at 6224 cents the forward PE ratio of 14,7x, based on estimated F2017 earnings, isn’t cheap for a stock that is essentially ex-growth and which also faces the possibility of further earnings decline.

Levels below 6000 cents start to offer relative value on a longer run view. My revised fair value is 5500 cents per share.

Trading Sell maintained and Portfolio Buy maintained for those with a longer horizon. 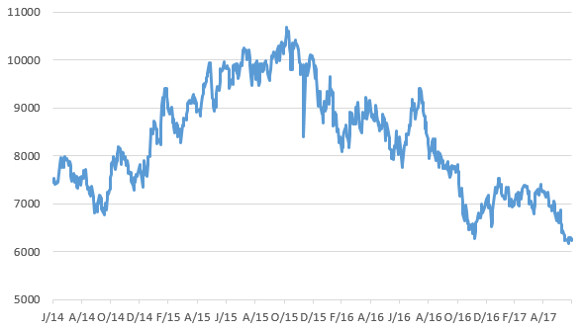 Woolies and the JSE All Share Index based to 100

Woolies and Clicks based to 100