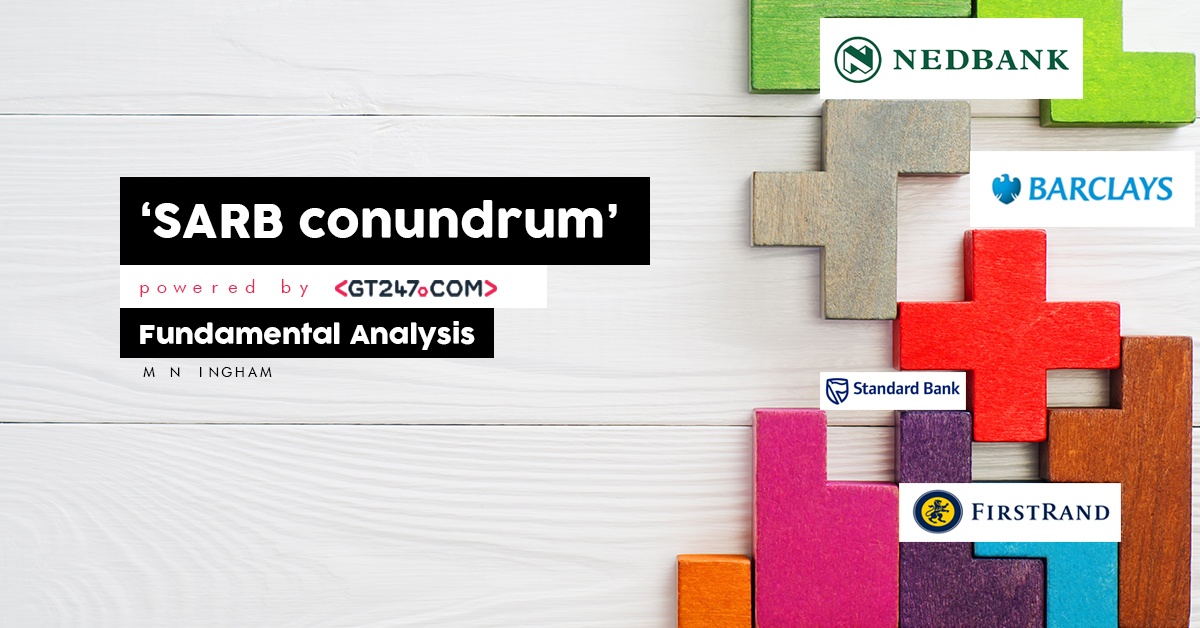 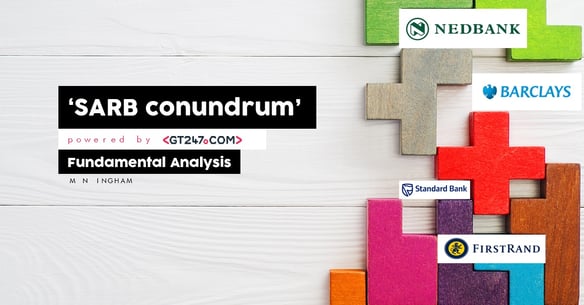 In the days leading up to the South African Reserve Bank Monetary Policy Committee Statement on 20 July 2017, the share prices of banks were in a firming trend. They have remained firm.

The governor said that “given the improved inflation outlook and the deteriorated growth outlook, the MPC has decided to reduce the repurchase rate by 25 basis points with effect from 21 July 2017, to 6,75% per annum”. He also said that “four members preferred a reduction, while two members preferred an unchanged stance”.

The governor qualified the decision to cut the repo rate by 0,25% with the following comment. “As we have emphasised on numerous occasions, the MPC does not view monetary policy as the solution to the structural growth constraints in the economy. Nor does it believe that a reduction in interest rates will provide a significant stimulus to growth in the current environment of low confidence and political uncertainty. It will however provide some relief at the margin”.

That qualification is important. He is saying that if you have bad government policy and lousy politics, that inhibits business formation, wealth creation, job creation, GDP growth, and confidence, interest rates have no power as a growth tool. In other words, interest rates have as much effect as pushing on a piece of string.

Now, the overwhelming consensus was for unchanged rates. A constellation of economic and political factors gave little cause for a cut. Furthermore, the trend abroad is to rising interest rates, both at the short and long end. To an extent, South Africa has been atypical since January 2014 having been in a rising rate cycle.

Yet, bank shares did not behave as though rates would be on hold. Did someone get wind of the SARB change in heart? If there was a case of buy on rumour, there has been precious little selling out on fact.

At the moment, the interest rate upward cycle, that comenced on 31 January 2014, has shifted to a downward cycle with the Prime rate, at 10,25%, 175 basis points higher than at the start of the hiking cycle.

Is this the start of a large move down in rates or simply a minor adjustment to reflect negative economic fundamentals? Could we see a further 1,75% downward move to get back to where we were before 31 January 2014? Political events that affect finacial markets, country rating and the real economy, have put the Reserve Bank in a tricky position.

Mortgage advances have decreased after inflation this past few years and currently stand at R1,3 trillion. Instalment sales show a similar pattern. Overdrafts and loans at R1,24 trillion have grown above inflation, suggesting some distress borrowing, but credit card debt, having grown rapidly between 2011 and 2014, has since slowed sharply.  Total loans and advances to households as a ratio of gross domestic product declined from 42% of GDP before the global financial crisis in 2008 to 33% last year.

The governor states that “underlying demand in the economy is extremely weak and the MPC is concerned about the deterioration in the growth outlook over the forecast period. This decline is broad-based. It is unclear where the drivers of accelerated growth will come from in the absence of credible structural policy initiatives that will reduce uncertainty and increase business and consumer confidence”.

The Reserve Bank is sending out an unequivocal message that it is extremely worried about the economy, far more so than previous MPC statements have suggested.

Phrases such as “credible structural policy initiatives”, “structural growth constraints”, “continued poor performance of gross fixed capital formation”, “policy uncertainty, a recent example being in the mining sector, is likely to constrain investment” the rand remains vulnerable to domestic political shocks and to the possibility of further ratings downgrades”, among others, could come right out of a neo-classical IMF paper.

As with the recent retort to the Public Protector’s idiotic utterances about the Reserve Bank’s mandate, the Bank is no longer pulling any punches and saying it as it is.

Rising interest rates have a positive endowment effect on banks’ capital and funding - assets reprice a bit more than liabilities. A 1% rise in the repo rate could have a 15-basis point (or 0,15%) margin effect on Nedbank, a 17 to 18 basis point effect on both FirstRand and Barclays Group Africa, and a 35-basis point effect on Standard Bank. So, rising rates, all else equal, benefits the margins of the big four banks.

However, the so-called endowment effect that benefits income as rates rise is temporary and superseded by the negative implications of reduced borrowing affordability.

Because banks have a natural hedge or an endowment effect that derives from rising net interest margins, this partially offsets rising impairments in the early part of a rising rate cycle. But, as affordability of credit instalments deteriorates, growth in advances books and thus income eventually weakens. Non-performing loans would also rise. Credit losses are now above the ten-year average.

A 0,25% reduction in interest rates has a negative effect on earnings, assuming non-performing loans as a percentage of advances are unchanged. To use Barclays Group Africa as an example again, the impact of that 0,25% on interest income translates to about 2% on the earnings line, all else equal.

To put this 0,25% decrease in context for valuation purposes, the present value of cash flows of banks increases by only 2% if the long bond rate reacts to the move and yield falls and the price rises. So, a reduction of 0,25% in the weighted average cost of capital has a minimal present value effect on a share price.

The big four banks, FirstRand, Standard Bank, Barclays Africa Group, and Nedbank, are particularly sensitive to fluctuations in long bond yields, the primary driver of the value of bank share prices which exhibit an inverse relationship to the ten-year government bond yield.

The following graph illustrates clearly the inverse relationship between the long bond yield and the FirstRand share price. What is interesting, is that risk aversion appears to have lightened of late with the price of FirstRand rising disproportionately to the 0,25% fall in the repo rate.

FirstRand share price in relation to the R186 bond yield 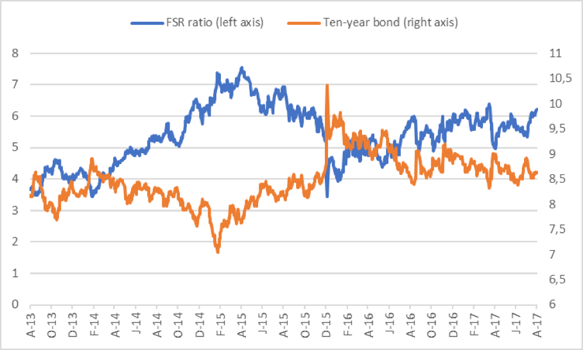 The share prices of the big four banks have been in an upward trend, with Standard Bank and FirstRand particularly perky.

For an analyst, there is little cause to make a meaningful change to the valuation scenario and good cause to adjust earnings down.

I have cautioned on exposure to the banking sector because of uncertain political developments and the sensitivity of bank share prices to such developments. Post 9/12 or Nenegate, the R186 long bond yield spiked by 220 basis points, sending bank share prices down by roughly 25% in the immediate aftermath. If we got another political shock to the system, it is bank stocks that will get hit first and hardest.

In May I noted that foreigners have been net buyers of late, increasing their shareholdings in the big four through 2016. This is possibly because of the relative rating. South African banks are attractive from a yield point of view despite poor earnings growth prospects.

Even after the re-rating of late, the aggregate forward dividend yield is 5,8% with ABSA (Barclays Africa Group) offering a forward yield of 7,5%. FirstRand, the top-rated bank, offers a respectable forward yield of 4,8%. Price to book ratios are also relatively attractive and average 1,8x with FirstRand at a premium 2,8x.

Forecasts and valuation metrics for the big four banks 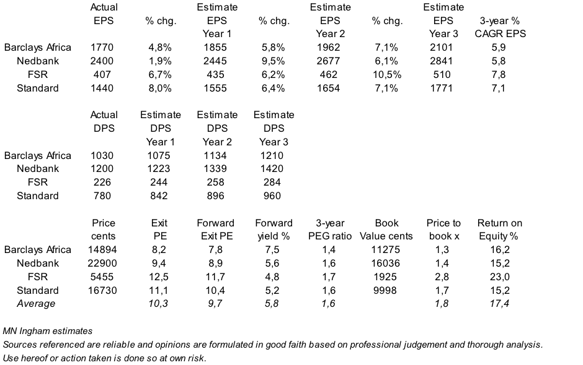 FirstRand remains the preferred bank of overseas fund managers with 34% held offshore. If I take free float only, offshore investors have more than a 60% share of the free float. These percentages have increased from 30% and 55% respectively pre-Nenegate.

For Standard Bank, 33% of the shares are held by overseas investors whilst 44% of the free float is held overseas. Pre-Nenegate, this was 29% and 38%.

Barclays PLC has sold down to an effective 15% shareholding in Barclays Africa Group through a successful placement of 33,7% of the issued share capital. Overseas fund managers retain a substantial holding here too.

Whilst foreign shareholders do have an important role in price discovery and have a meaningful stake in local banks’ share registers, they tend to be quick to sell down if jitter arise.

Daily value traded relative to market capitalisation has not been noticeably different of late for the big four and in the case of FirstRand trade of late is below the twelve-month average.

The capital adequacy of the big four is good and so this is an insulator from large shocks in the system. FirstRand remains the highest in total capital adequacy at 17,3%, with Standard Bank at 16,6%, Nedbank at 15,7% and Barclays Group Africa at 14,5%.

Investors and traders have become somewhat more sanguine toward bank stocks. The 0,25% drop in the repo rate may not signal an aggressive downcycle but the decision is indicative of the Reserve Bank’s concerns over political and economic problems. The business environment is difficult for banks and my earnings forecasts reflect that, with three-year earnings growth barely keeping in line with nominal GDP.

Share prices are now toppish with the recent upward run an opportunity to take money off the table from a trading point of view. Longer term portfolio holders would wish to remain exposed at weight.