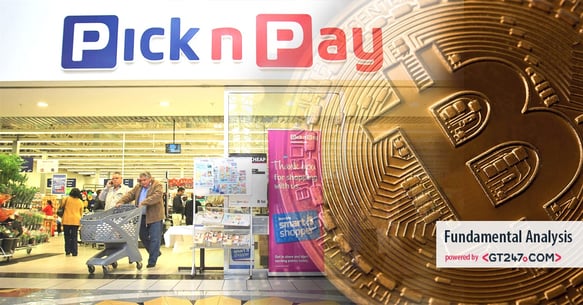 "In shape for tougher times"

Grocer Pick n Pay reports interim results for the 26 weeks to 27 August on Tuesday, 17 October. The trading statement issued on 2 October indicated a normalised 10% to 15% increase in headline EPS. HEPS will therefore be approximately 93 cents per share, up from 82,43 cents in the comparative period which was an increase of 23,7%.

Investors should be aware that actual earnings will decrease by around 20% due to the voluntary severance programme which was concluded in April and which removed 10% of roles and functions. This was in line with the modernising process that has been underway at Pick n Pay. This one-off cost will be expensed in the first half results and is anticipated to be fully recovered in the current financial year.

I estimate the severance programme cost to be R140 million or 29 cents per share. The improved cost base will be beneficial for operating margin from 2019 onwards. Pick n Pay’s objective to lower operating costs is helping the Group to grow earnings by double digits despite single digit turnover growth.

Turnover for the six months will be approximately R39 billion, growth of 5,1%. I anticipate that trading margin will edge up to 1,6%. Not only is the retail environment tough but Pick n Pay is also investing in price for customers. There have been permanent price reductions over 1,300 fresh and grocery products. Selling price inflation is only 3,6%, which is substantially below official food inflation.

Pick n Pay is shifting to flexible, multi-format, multi-channel stores located for convenience. Space utilisation is being improved. Improved supplier cooperation and the mix between supplier delivery to store or to DC means a 20/80 storage to sales mix is achievable, liberating space for sales and a better customer experience but within an overall smaller store size.

The focus is on remodelling and rolling out new generation stores. New stores are ranging from 200m² express outlets to no more than 7 000m² for a supermarket with 5000m² now feasible with the systems they have in place. The SAP system has been reconfigured. Buying is centralised and coordinated. Underperforming and poorly located stores have been closed. The Boxer brand is being rolled out nationally.

Capital expenditure to support this modernisation has increased and totalled R1,9 billion in F2017, with a similar amount this year.

In sympathy with this modernisation, the listing of Pick n Pay Holdings Ltd was terminated on 30 August 2016 and there is now one point of entry to investment in the business. The Ackerman family retain a blocking majority of 52,80% of the voting rights, due to newly created B shares, but have an effective 26,84% of the economic interest. The practical effect of this is that the free float increased from 43% to 73%, which improves the JSE index weighting.

I’ll be interested to see how the Board treat the dividend declaration given that actual earnings will be down but normalised earnings will be up. Pick n Pay has a policy of the annual dividend covered 1,5x by headline earnings with the first half/second half split approximately 17%/83%.

For the full year to February 2018, I estimate 15% growth in normalised HEPS to 304 cents and I anticipate earnings growth for the next few years to be at least in line with that, possible higher.

To a certain extent, Pick n Pay is playing catch up with Shoprite, against which it lagged for some years. The strategy is slightly different to Shoprite, with the emphasis on improving profitability rather than growing market share.

The CEO Richard Brasher has kept to his commitments and is delivering on the strategy. Recent news that Pick n Pay was trialling bitcoin for payment of groceries, that credit terms would be offered, and that it has a signed a ten-year agreement with new digital bank Tyme have made headlines. These are interesting initiatives but I don’t expect them to materially move the needle on earnings or the investment case.

My recent note on Shoprite dated 28 September (see “Trolley for trolley it’s worth paying more”) made the point that the business is difficult to beat as an investment in grocery retail. Whilst Pick n Pay will never match Shoprite on size it is nonetheless doing the right things. With good execution on a clear strategy it is likely to continue delivering earnings growth through a difficult time in retail generally. The yield is relatively attractive at 3,6%.

In August, I did a trade idea on buying (long) Pick n Pay Stores Limited (PIK) as the technical set up looked great for a long trade. Unfortunately, it started out well but did not reach my first Target price and missed it with a couple of points. The retail sector has been taking a bit of a beating lately and we saw the price of Pick n Pay Stores Limited (PIK) move lower from end of August to now where it is currently finding some support at the 5500c level.

Pick n Pay Stores Limited (PIK) are releasing their interim results on the 17th of October and I thought it would be great to give an overview from a technical aspect on possible outcomes.

The price has been testing the 5286c and 5486c support levels over the last year and still needs to break this level. When the results come out these are the levels to be aware off if the market takes negatively to the result outcome as the price will move lower.

So, if we take a closer look at the chart we can see that the MACD indicator is still pointing down and has not turned up, signifying that there might be more downside to come before the price moves higher putting outcome 2 into play as possible outcome before it moves higher. 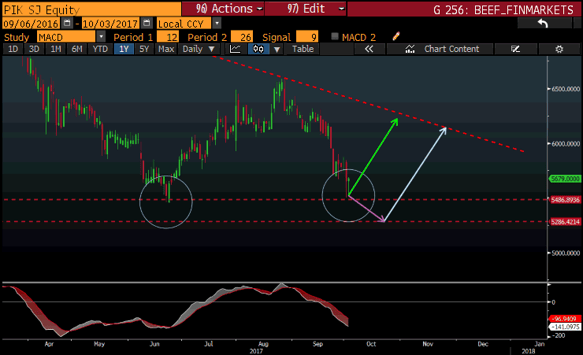