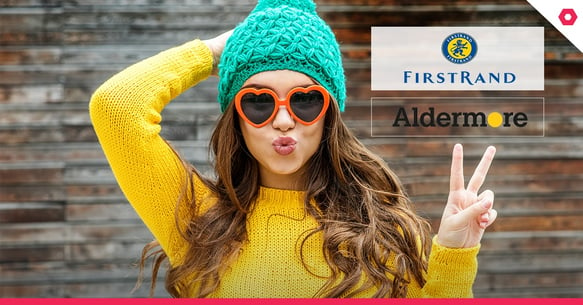 A good fit?: It is not just Capitec that does things differently. There are plenty of overseas examples, one of which is Aldermore in England; it has no branch network, it is growing in leaps and bounds, and aims to deliver “banking as it should be” rather than banking as it always has been. Aldermore is so hip it makes FNB seem square.

It is not just Capitec that does things differently. There are plenty of overseas examples, one of which is Aldermore in England; it has no branch network, it is growing in leaps and bounds, and aims to deliver “banking as it should be” rather than banking as it always has been. Aldermore is so hip it makes FNB seem square.

Aldermore Group PLC, the holding company of the operating entity Aldermore Bank PLC, has confirmed it recently received an indicative proposal from FirstRand regarding a possible offer for the entire issued ordinary share capital of Aldermore.

The confirmed possible offer price is 313 pence per ordinary share in cash.

The Board of Aldermore has indicated to FirstRand that it is likely to recommend a firm offer at this level.

There are 344,9 million shares in issue. However, to be issued ordinary share capital has to be added as would options. From the latest annual report, I notice that there are 6 million outstanding awards/options that would vest on acquisition.

In effect, shares affected could number 351 million. This means the possible acquisition is worth at least £1 098,6 million. There would be further advisory and M&A costs associated with the deal.

Aldermore states that they are in preliminary discussions about the details of the possible offer, subject to a number of conditions and with no certainty that any firm offer will be made.

Aldermore is a specialist, niche bank in the areas of asset finance, invoice finance, SME commercial mortgages, buy-to-let and residential mortgages. Retail and SME deposits account for 84% of funding. Net interest margin is 3,5%, ROE is 19%, cost to income ratio only 44%. The company is well capitalised. There is a Capitec feel to it.

If I assume 30 pence in EPS for 2017 the deal value is 10x 2017 EPS. Price to book is 1,9x, which is attractive for the sellers as a number of big banks in Europe trade at a discount to net asset value.

FirstRand already has a vehicle asset finance business in UK, called MotoNovo. MotoNovo makes the equivalent of R1 billion in profit. Aldermore will make pre-tax profit of around £156 million in 2017 or R2,8 billion so a much bigger business.

In round numbers this would add £115 million or R2,1 billion to earnings. Normalised earnings run at R24,5 billion so this is 8,5% of that number.

A deal value of £1,1 billion or R20 billion could be easily funded by FirstRand. The question is, by what mechanism?

FirstRand does have over R50 billion in SA cash on balance sheet but getting SARB approval for a bank to shift a chunk of cash offshore is very doubtful.

My sense is that it could raise GBP overseas credit facilities on the back of the Aldermore asset base and the strength of the FirstRand asset base.

Bidvest is a good recent example of an overseas asset purchase. It bought Noonan in Ireland for €175 million and this was done foreign credit facilities, with three-year, variable rate, euro-denominated funding at an attractive rate. Bidvest had no overseas assets post the Bidcorp demerger and had no trouble getting funding. Imperial bought Palletways in England with foreign credit lines.

Should they get overseas funding at say 3,5% I estimate that after tax profits would be enhanced by a net £95 million or R1,7 billion, which is 7% of current group earnings. This would take EPS from 436 cents to 468 cents, which would enhance EPS by 7%.

On balance, this appears mildly positive for FirstRand. They have clearly done a lot of homework already and have been in preliminary conversation with Aldermore. I’ll revisit when we get further clarity on an offer.

I reiterate caution on banks as a class given the sensitivity of the valuation of banks to bond yields, which, as we have seen, are affected by negative political factors. The window for a further easing in the repo rate could be closing given rate signals abroad. Even if there is a reduction, another modest 0,25% seems likely.

I have consistently maintained FirstRand as preferred exposure in this sector and that the bank warrants a premium in the banking sector.

FirstRand, Barclays Africa Group, Standard Bank, and Nedbank based to 100 over three years 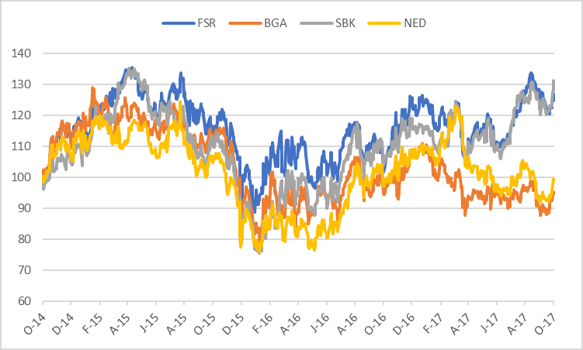 With the passage of time I have adjusted fair value to R54 with the target price at R57.