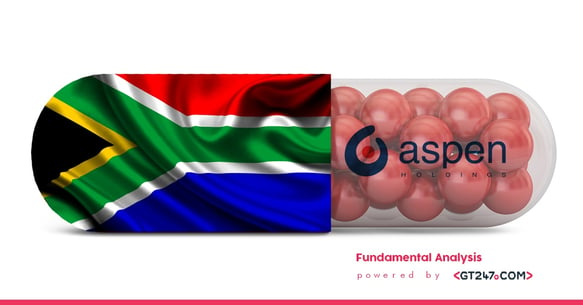 Aspen Pharmacare reports results for the twelve months ended 30 June 2017 on Thursday, 14 September. I’ll do an update post the results but meantime some pointers to note ahead of the result, particularly if you have a trading position.

Don’t get excited about the 45% growth on headline as it is not a reflective number and comes off a low base, depressed by net monetary adjustments and currency devaluations affecting Venezuela. In 2016, headline EPS decreased by 23% with hyperinflation adjustments accounting for 191 cents.

There is a kernel of good news in the likely result – the second half looks to be significantly stronger than the first half and squares with my expectation.

If Aspen records normalised EPS of 1465 cents for the year it implies second half growth of 27%, a significant improvement.

I have a full year dividend forecast of 264 cents. Aspen has a high dividend cover ratio, retaining cash for reinvestment, and this explains the paltry dividend yield of less than 1%.

In addition, gearing is relatively high after a spate of corporate activity and so paying down debt is a priority. However, Aspen has a comfortable interest cover ratio and I am not concerned about the balance sheet.

The other thing to note is that Aspen generates only 20% of revenue and profit in South Africa. In other words, 80% of earnings are in foreign currency. Rand is the reporting currency but the rand result is not a representative reflection of the underlying results in varying currencies.

Foreign exchange losses, arising from the rand strengthening against forward exchange contracts, were a feature of the first half result and will run through to the second half too.

There are many items affecting EPS, including fair value gains or losses on financial instruments and notional interest on financial instruments, both included in finance charges. Currency is particularly big and it also affects working capital. Aspen trades mainly in foreign currencies and imports active pharmaceutical ingredients, largely in US dollars.  Against the US dollar, the rand is 6% stronger on average in 2017.

The second half will benefit from the annualised effect of anaesthetic sales, improved results in Latin America and the benefit of the exit from Venezuela, the effect of the acquisition of Fraxiparine and Arixtra in China, and a stronger South Africa result.

It will be interesting if Aspen gives further information about the Chinese infant milk formula market given the meaningful impact it could have on earnings. There is opportunity for Aspen to use its IMF base in Australia and New Zealand to exploit growing Chinese demand. The worldwide market for IMF is $50 billion and China is expected to account for 45% of demand within four or five years.

The Aspen share price has been relatively stable of late in the R280 region. There is little to suggest an unwelcome surprise in the results announcement and should management give favourable colour on the near-term outlook, it is feasible for the stock to strengthen post the result.