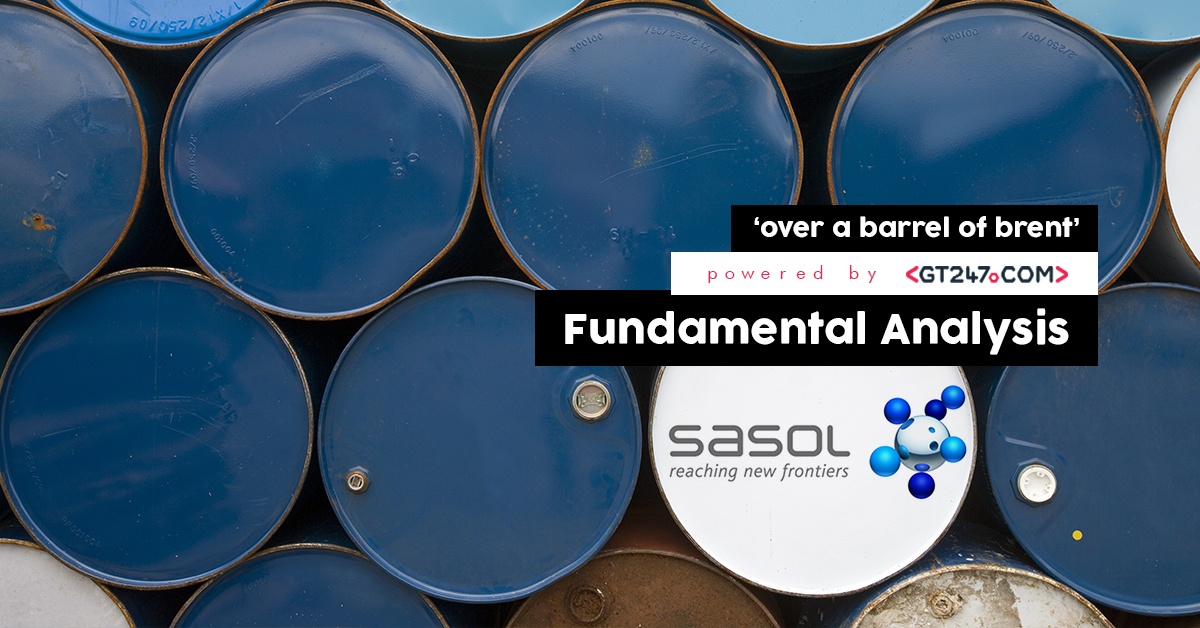 Sasol [JSE:SOL] "Over a barrel of Brent"

Fair value and target price: maintained in the region of R400

Sasol reports results for the year ended 30 June 2017 on 21 August. Earnings will be right in line with my estimates whilst Q4 production figures, released last week, are encouraging.

Headline earnings per share (HEPS) will decrease by 16% at the mid-point of the range, which aligns with my forecast of a 16,2% decline to 3471 cents per share from 4140 cents. There will be differing component pieces that make up this number and we’ll have finer detail when the company reports.

A 53% increase in EPS to 3299 cents from 2166 cents in F2017 is off a deflated base, brought about by prior year impairments relating to a low-density polyethylene unit in the United States and Sasol’s share in the Montney shale gas asset in Canada.

Included in earnings will be a translation loss of 253 cents due to the exchange rate being 6% stronger at R13,61 on average.

However, against that is a large mark-to-market gain on forex hedges of 205 cents.

A strike in the first half at Sasol Mining affected production, meaning higher external coal purchases. This negatively affects HEPS by 106 cents.

HEPS is also negatively affected to the extent of 200 cents by litigation and rehabilitation provisions.

There is a 1% increase in production out of Sasol Synfuels, which is at a record production level. Counter to this is lower production at the Natref refinery due to a shutdown and an incident in May. White product sales volumes are down 2%.

Base Chemicals is up 4,7% but this increase was mostly in H1 as sales are down around 10% for H2 because of a fire and an unplanned shutdown in polypropylene and PVC.

Performance Chemical volumes are up and feedstock costs are down, which means a boost to gross margin.

The production report also shows cumulative capex on Lake Charles at $7,5 billion with completion at 74%.

Most of the forecasts captured on Bloomberg reflect a “house” view of investment banks’ strategists on exchange rates or oil. This means forecasts can be behind the curve.

Sasol remains sensitive to oil and currency although earnings will start to be assisted by Lake Charles from F2021 onwards.

There has been a close relationship between the ZAR price of a barrel of Brent oil and Sasol earnings for many years – roughly a 5x multiple. Even over a shorter period, such as 2007 through 2016, the 5 to 1 relationship holds (see graph below). 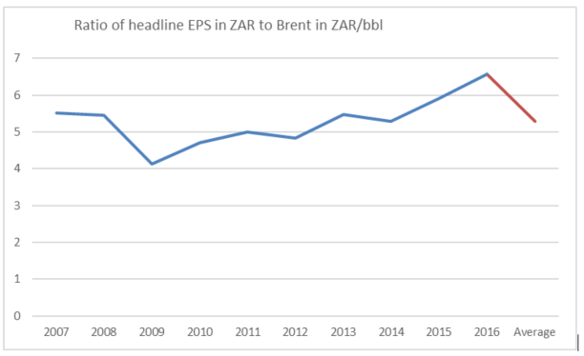 Earnings trend in line with the ups and downs in oil (see graph below). 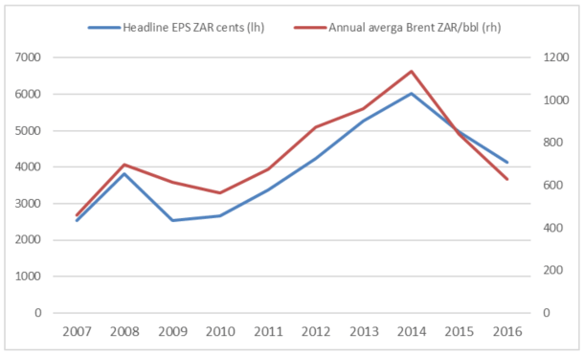 I hold to the view of selling rallies in to strength. The stock is too cheap at levels closer to R350 on current earnings variables. Fair value and target price maintained in the region of R400 on longer run considerations.