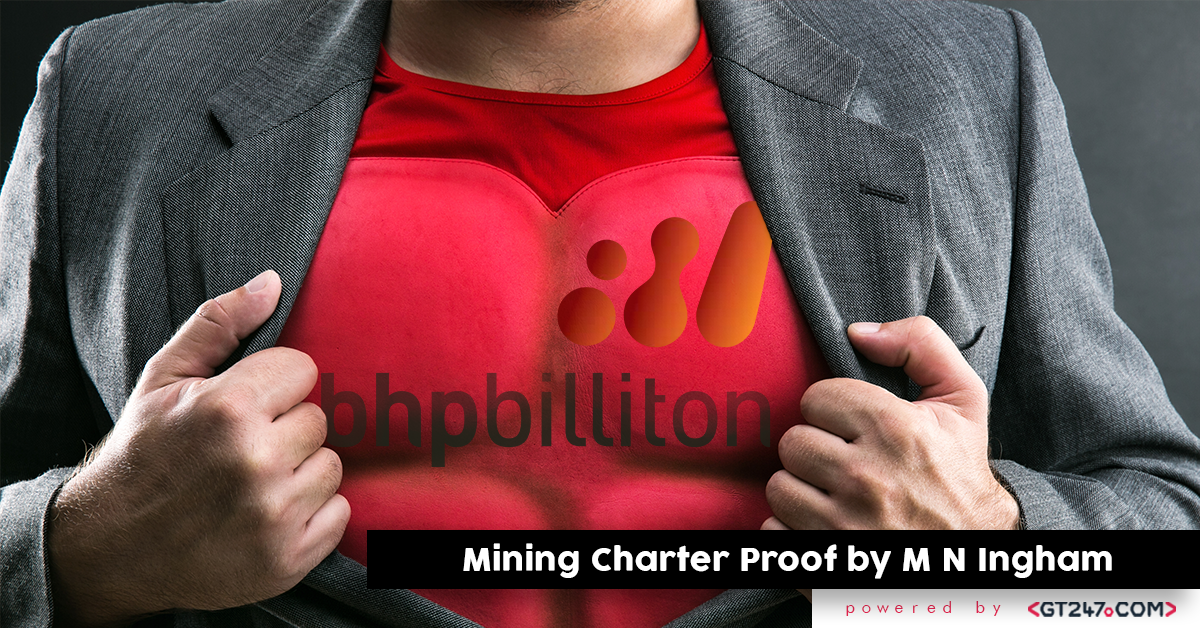 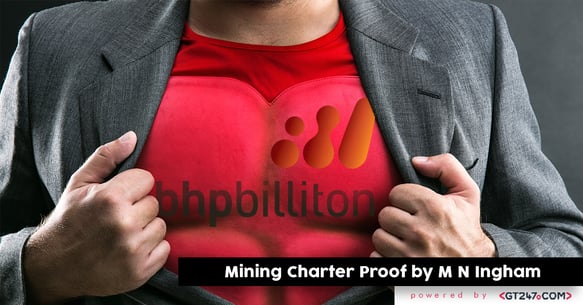 My note on AngloGold Ashanti dated 14 July 2017 (see “Tanzanian mining Act yet another headache”) illustrated the risks and uncertainties of mining on the African continent. Here is an example of a stock that offers reasonably good fundamental value but I wrote that “a combination of toxic politics and permanent uncertainty means these factors tend to take precedence over company specific fundamentals”.

Caution is necessary at the best of times when it comes to mining exposure because of the inherent cyclicality of commodities, the unpredictability of demand, volume and prices, the volatility of exchange rates, the complexity and expense of the mining process, and the sensitivity of profits to changes in variables that management have little influence over.

Miners are mainly price takers and can only influence price at the margin through production decisions. China this past decade has become an especially large influence. In steel, China accounts for 43% of global consumption and 50% of production. In almost all commodities, China is the key determinant.

For South African investors seeking alternatives in mining, BHP is a good option to look at. You can be exposed to mining but with less of the geographic and political risk you get in stocks such as AngloGold Ashanti, South32, Sibanye or Amplats. BHP has no mining exposure in South Africa – those assets that are exposed were unbundled in to South32 in May 2015 – so BHP is Mining Charter “proof”.

The failure of the Fundão tailings dam at the Samarco iron ore operation in Minas Gerais, Brazil on 5 November 2015 was an operational problem and is not a political issue. Samarco is jointly owned by Brazilian based miner Vale S.A. and BHP. The failure is subject to negotiation and settlement with future financial impacts on the parties treated as an exceptional item.

BHP released its production report for the year ended 30 June 2017 on 19 July. Overall, it was a positive year for the mining giant with further gains signalled for F2018, with the exception of petroleum.

Iron ore production in F2018 is anticipated to be 3% to 5% ahead, coking or metallurgical coal 10% to 15% ahead, thermal or energy coal broadly flat, and petroleum down by 9% to 13% overall with the largest decline in onshore US. BHP is ramping up development in onshore US, with capex of $1,2 billion planned in F2018 on five additional rigs.

My forecast price deck and production assumptions are below: 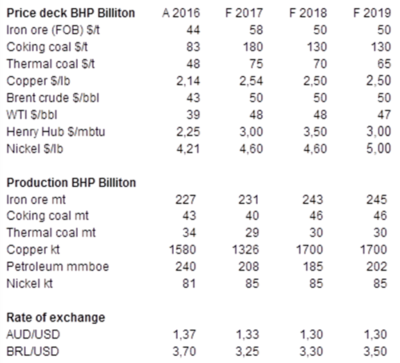 Forecast pricing is also kept conservative with iron ore at $50/ton, Brent crude at $50/bbl, copper at $2,50/pound, and with coal prices easing off slightly.

Petroleum will consume over 50% of group capex going forward (35% on average over the past five years) and thus total group cash flows will be necessary to grow this business. Iron ore share of capex is likely to decline as a share of the total capex to about 20%, in line with copper. Coal capex is likely to be minimal but coal is cash generative.

BHP will record exceptional items of $740 million for H2, of which the strike at Escondida will be $367 million after tax with $373 million stemming from a withholding tax on a Chilean one-off dividend paid. This has no effect on underlying earnings nor on my valuation.

On my revised estimates, earnings are forecast to fall by 30% in F2018 and by a further 10% in F2019. It is probably safer to work on earnings of $4 billion going forward in a middle-of-the-road scenario on demand and pricing. This is well below the peaks of the commodity boom.

An analyst forecasting earnings and valuing a mining business would typically take a through the cycle view on commodity prices and production.

Spot prices, which tend to be variable, typically affect sentiment in the stock market but are unrealistic to assume as being a fixture for forecasting purposes. This is certainly true of iron ore, which has had a 70% price range this past twelve months. A 1% move in iron ore has a $200 million impact on EBITDA, assuming this applies for a full year, a 1 cent per pound move in copper has a $30 million effect, a $1 move in in the price of a barrel of oil has a $80 million effect, whilst a $1/ton move in the coking coal price has a $40 million impact on EBITDA. In earnings sensitivity, iron ore ranks first, oil second, coal third, and copper fourth. 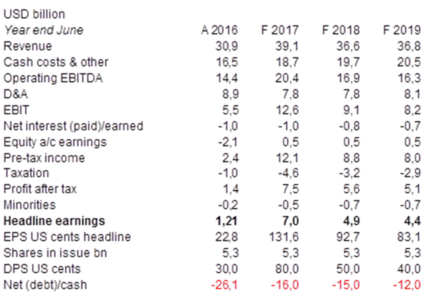 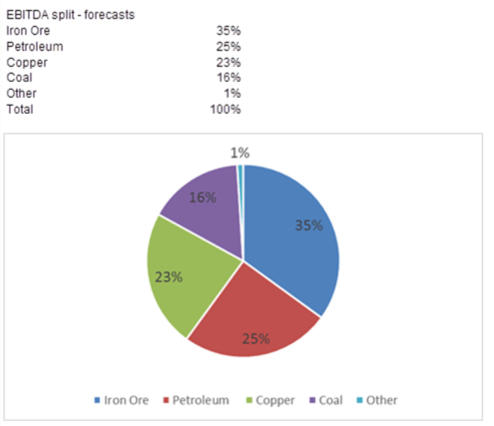 I have updated my valuation, which realises a higher number than in April, $21,95 per share versus $16,60. This is due to company specific operational factors and a more benign commodity environment. 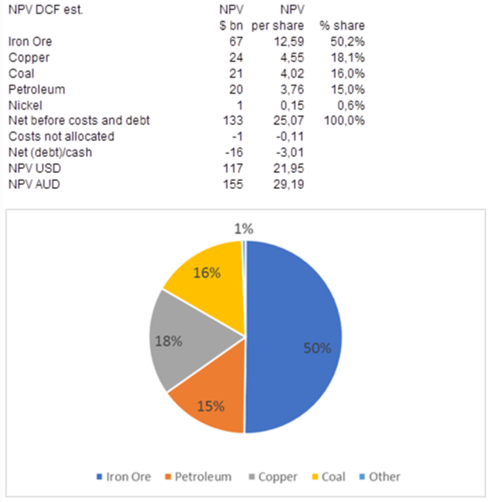 On a DCF, based on my forecast assumptions, iron ore dominates with copper a distant second and then coal and petroleum. 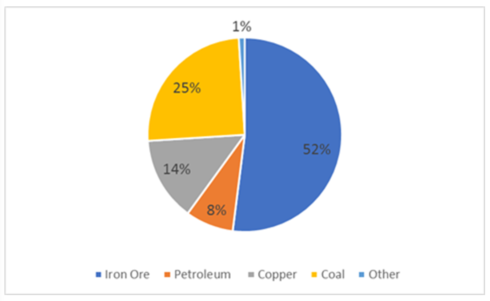 My most recent note on BHP was issued on 13 April 2017 (see “Elliott Wave”). That note analysed a proposal by Elliott, a hedge fund, for BHP to have a radical corporate restructuring. The note examined the corporate structure of BHP, the valuation dynamics, the technical issue of franking credits in Australia, the impact of buybacks, and the financial feasibility of the Elliott proposal. My conclusion was that “whilst deceptively attractive, the proposal has numerous shortcomings on closer examination and the likelihood of unintended and costly financial consequences”.

To get additional perspective on this topic, I’d suggest clicking though to that note if you’d welcome a refresh or if you have not had the opportunity to view it yet.

I have updated the share price differentials between PLC and Ltd. The PLC price is converted to Australian dollars at prevailing rates. The “Elliott Wave” note provided an explanation for this. 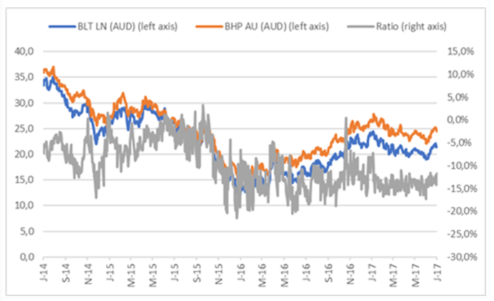 The JSE price mirrors the LSE price rather than the Ltd price on the ASX. There are periodic deviations, such as Nenegate in December 2015, but the ratio tends to move back in line. Over the past two years the difference in the respective share prices in ZAR has been 0,1% - which compares with the 12% deviation between PLC and Ltd. In fact, the share prices of BHP Billiton Ltd on the ASX in ZAR and BHP Billiton PLC on the JSE in ZAR exhibit a near identical pattern to the PLC/Ltd differential. 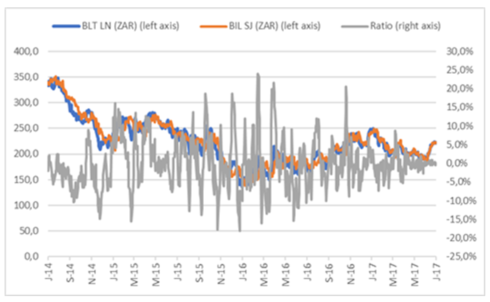 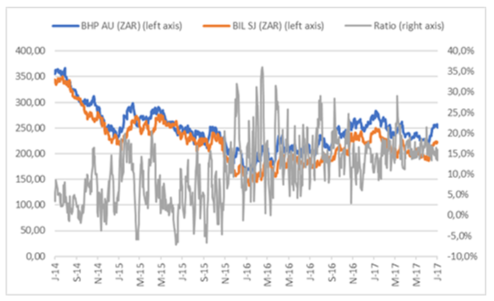 On my conservative scenario DCF, I have iron ore as the largest asset by value on a sum-of-the-parts basis at 50%, followed by copper at 18%, coal at 16%, petroleum at 15%, and nickel and other at 1%. 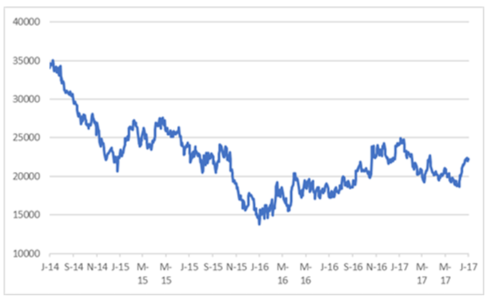