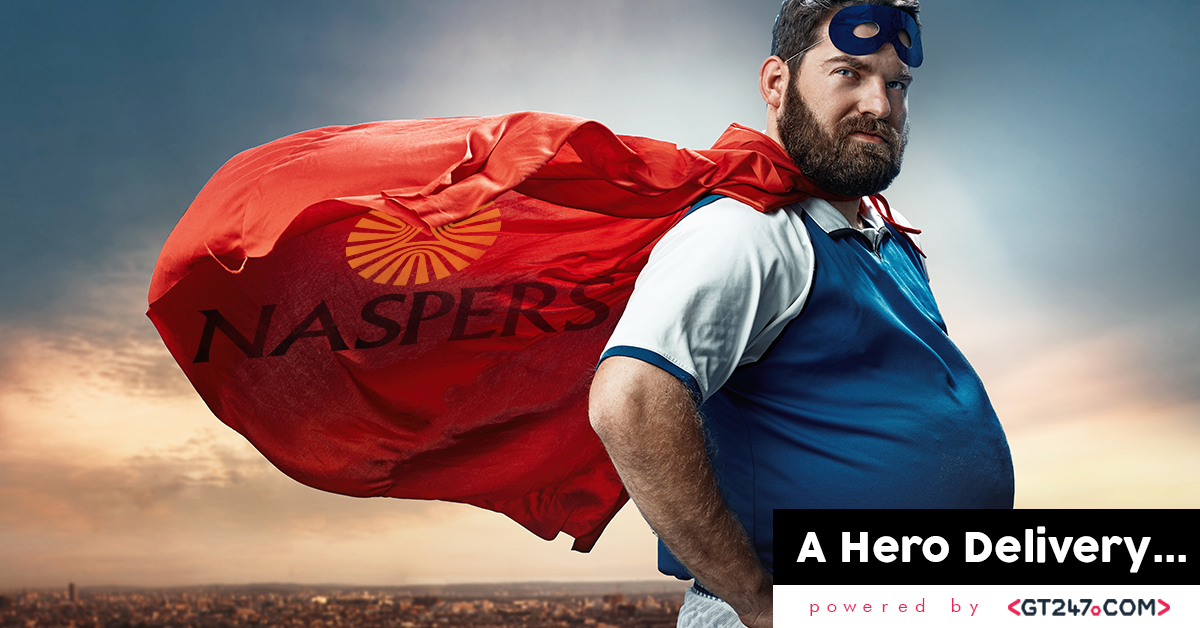 At R2890, the Naspers discount to its stake in Tencent is 26%, barely budging.

To put this in perspective, the negative difference between the see-through-value of the Tencent stake and the Naspers market cap is R427 billion or $32,5 billion. This is again a record in absolute money of the day.

I mentioned that what had been a 15% to 20% range some months ago has now broken lower in recent weeks to above 25%. This is a large derating and the recent trading suggests that it is possibly becoming a new lower level, for now. The derating is even more significant when we see it in the context of a premium to the see-through-value of up to 30% five years ago.

Risk in the share price on a relative basis has possibly subsided. SA shareholders were shielded in rand terms (not dollar terms) from the substantial underperformance relative to Tencent- the share went up but disproportionately less than Tencent whilst rand weakness was also a compensating factor in creating money illusion. Naspers grew by 474% in five years, but only by 260% in USD. Tencent meantime grew by 500% in USD, meaning Tencent outpaced Naspers by a factor of almost 2x in real money.

Given the large discount today of 26% it means the only downside, for now, is if Tencent weakens and Naspers follows that, depending on where we are on the currency crosses. A narrowing discount from a trading point of view is typically a good time to sell with a widening a time to buy again – although the discount is now quite stubborn at this level with no material deviation yet apparent, either way.

My last note on Naspers dated 23 June (see “2017 result ready reckoner”) unpacked the annual results and the ongoing cash burn of the developmental assets. Since then, the valuation disconnect with Tencent has widened with the Naspers discount to its stake in Tencent widening to around 27% from 23%, a new historically high discount.

But of late there has been some better news, albeit modest. Naspers has made a nice uplift on its small stake in newly listed Berlin-based Delivery Hero, the largest online food-delivery company by orders globally. Delivery Hero processed 171 million orders in 2016, growth of 65%, and has 150,000 restaurant partners in over 40 countries. The company is loss-making after six years in business.

Naspers already had an interest in food delivery through iFood, based in Brazil. iFood made a small profit of BRL15 million in 2016 on revenue of BRL171 million. Whilst the Brazilian real currency numbers are small in dollars (the profit is $4,5 million) at least the numbers are heading upward. Orders per month are now 3 million, up from 1,1 million in 2015 and 0,5 million in 2014.

Back in May, Naspers chipped in €387 million to Delivery Hero ahead of a Frankfurt Prime Standard listing on 30 June. From 20 June through 28 June there was a bookbuild and the subscription price was €25,50 per share.

The placement volume, excluding a “greenshoe”, was €865,7 million and together with the greenshoe the total was €995,6 million. The greenshoe provides for the underwriters to sell investors more shares than initially intended if demand warrants it. Total shares outstanding post the bookbuild is 172 million.

Naspers today will cost you R2613 (and for those investing via the Easy Equities platform the benefits of fractional ownership makes this much more affordable). With the rand at R13,38/$ the share price translates to around $195 per share.

In rand, your Naspers share over five years is up 474% whilst in dollars it is up 260%. That doesn’t seem too bad, not least versus the JSE All Share Index which is up 55% in rand over five years and which has flatlined for three years. Not bad that is until we see what Tencent has done.

I have taken each price data point converted to USD at prevailing rates of exchange on the ZAR and the HK$. In turn, I have formulaically based both Naspers and Tencent to 100.

It is appropriate to standardise on the US dollar because Naspers reports financial results in US dollars and most of Naspers earnings is international, notably China, whilst the Hong Kong dollar shadows the USD and has been broadly unchanged over the period.

The sharp divergence is shown graphically below. The money illusion of rand weakness has boosted Naspers on the JSE but hidden the real underperformance in USD. 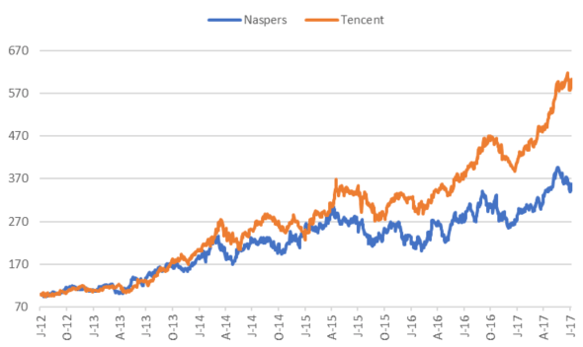 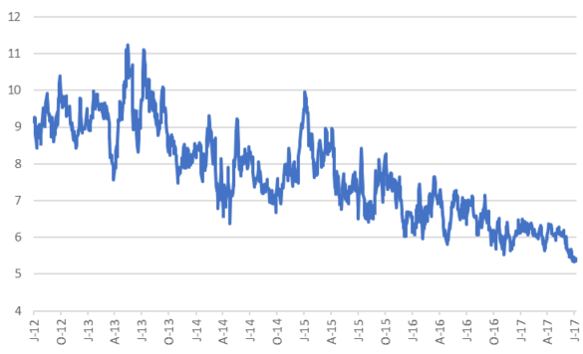 At R2613, the Naspers discount to its stake in Tencent is 27% which compares with a premium of around 30% five years ago. In other words, Naspers has gone from a substantial premium to the see-through-value of the Tencent stake to a substantial discount. Of some concern is that what had been a 15% to 20% range some months ago has now broken lower in recent weeks to above 25%, which is a relatively big derating.

I mentioned previously that a narrowing discount is typically a good time to sell with a widening a time to buy again and that the material discount to Tencent provides a cushion for possible negative surprises and some headroom for future upside if ecommerce delivers.