Non-Farm Payrolls are usually reported on the first Friday of the month, whereby the number of additional jobs added from the previous month is released. The US Non-Farm Payroll number for the month of April will be released locally on Friday the 3rd of May 2019 at 14:30 SAST.

The Non-Farm Payrolls number came in much higher than expected at 196K Non-Farm jobs against the 175K Non-Farm jobs forecast. The NFP number was also much lower than the ADP Non-farm Employment Change number.

The Average hourly earnings (M/M) did not beat expectations coming in lower at 0.1% over the expected 0.3% and the U.S Unemployment rate came in as expected at 3.8%.

The change in private employment overwhelmed market estimates and came in at 275K from the expected forecast number of 181K for the month of April 2019. All eyes will look to the comprehensive Non-Farm Payrolls report (NFP), especially wage growth numbers.

The Federal Reserve has spoken, and the markets reacted on Wednesday with the latest interest rate announcement which saw the interest rate unchanged. Markets came tumbling down as the FED chair Powell stated it is not a forgone conclusion that the FED will only cut rates this year. There is a possible increase in rates on the table if the data supports it.

By looking at the CME Group’s FED watch tool we can see that the probability of a rate increase is not on the table and the odds are rates will remain unchanged until later in the year.

The FOMC will be watching the Jobs numbers closely especially the wage numbers which might change the FED’s outlook moving forward. The U.S Economy has seen economic activity rise along with a strong labour market, but the personal income wage growth number released on Monday was much lower that expected. Wage growth comes into focus once more as the FED’s inflation growth target is subdued now which might lead to a rate cut if the CPI number does not increase.

The Average hourly earnings (M/M) number is expected to increase to 0.3% from the previous months 0.1% - This is a key figure to watch and if this number disappoints, it will signal a weak wage inflation outlook in the US.

Looking at the chart of the Dollar Index (DXY)

The U.S Dollar has been gaining momentum since the FED statements on Wednesday that a rate hike is not necessarily of the table.

Some technical and fundamental points to look out for on the DXY: 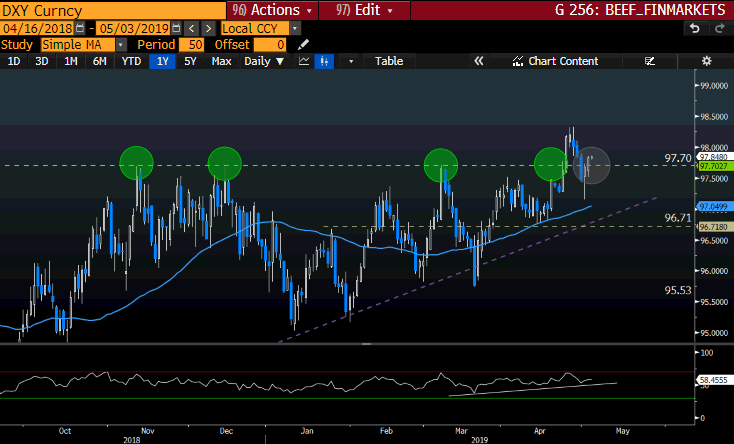 Technical Trade Outlook on the EURUSD

The EURUSD currency pair has started to move lower as was discussed in our Forex Technical Trade Note. The price action has continued to make lower highs and lower lows and is currently testing the 1.1207 support level.