JSE closes in the green, pulled higher by mining stocks 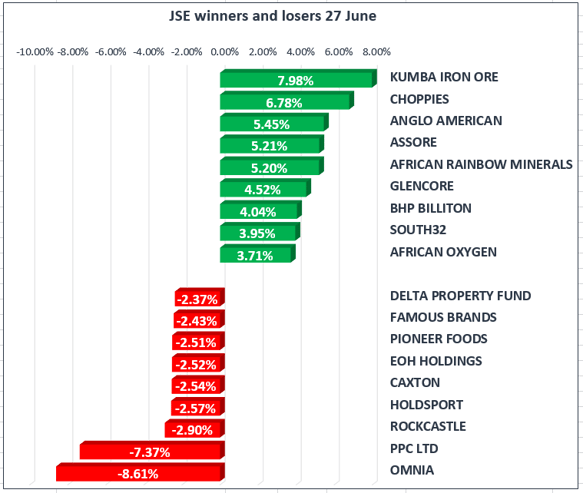 The local bourse edged higher in trading, pulled up by resource stocks.  Mining stocks were supported by the news that SA miners had applied to the high court to block the controversial new mining charter.

The gold price traded at $1248/Oz at the close of the JSE, having recovered from the minor flash crash experienced yesterday, when over $2 billion notional gold futures contracts were sold on the Comex.  The sale saw gold plunge 1.6% in a matter of seconds to $1236 an ounce before regaining strength.

The blue-chip Top 40 edged 0.39% higher, followed by the All Share Index which closed 0.28% up.  Markets were affected by the firmer gold price and weaker rand which boosted the Gold Mining Index by 2.01%, whilst Industrials closed 0.10% lower.

The rand extended weakness against the dollar following grim employment data released on Tuesday. The rand traded at R12.93 at the close, ahead of Janet Yellen’s address in London.

Last week the currency was negatively affected by domestic factors ranging from the release of the new mining charter, to the Public Protectors utterances around changing the mandate of the Reserve bank.

Omnia [JSE:OMN] took a bashing in the market and dropped 8.61% to R132.50 in a knee-jerk reaction to a disappointing drop in profit due to tough macro-economic factors affecting mining and the agricultural sector.

Naspers closed 0.33% down at R2608.00 per share, following the release of annual results on the 23rd of June.  The media company posted increased earnings due to their stake in Tencent.  Aside from the Chinese investment and the MultiChoice business, the numbers were disappointing with significant losses attributed to new business ventures.

The money illusion of rand weakness has boosted Naspers on the JSE but hidden the real underperformance in US dollars. Naspers performance disparity against Tencent sees a widening discount appearing.

Mark Ingham, an independent analyst for EasyEquities, indicated that the discount to the stake in Tencent appears to have widened to a historical high of 26%.

Google has been slapped with a record €2.4B fine after EU antitrust regulators ruled the company had abused its power by promoting its own shopping comparison service at the top of search results. The penalty is the largest doled out by Brussels for a monopoly abuse case and follows a seven-year-long investigation into the search group's practices