16 May 2019 / Equities and Indices / Research Notes Posted by: Barry Dumas

The trade tariff tensions between the U.S and China are escalating which has now focussed the spotlight firmly on the Federal Reserve to cut interest rates.

The CME’s FED Watch Tool, which is closely watched for any changes in sentiments that have gone from a 31% rate cut later in the year to a 76.4% probability that the FED might cut rates in December 2019.

The FED might only cut the interest rate if things get extremely worse, like a bear market and judging form a survey of global fund managers by Bank of America Merrill Lynch.

The tit-for-tat tariffs were kicked into high gear on Monday when China retaliated with imposing tariffs on some $60 Billion worth of U.S goods. This sent shockwaves into the markets which saw the DOW Jones drop over 2%.

By looking at the CNNMoney Fear and Greed Index it is clear that fear in the market is on the rise from a week ago.

Just as the renewed tariff disputes pick up steam and the tit-for tat tariffs are well underway President Trump felt the need to restrict Huawei from selling equipment in America. To top it all off the U.S is putting Huawei on a blacklist that could forbid the global Chinese company from doing business with U.S companies.

Take note: that volatility is expected on the U.S Indices and all major markets while these tariff disputes continue. 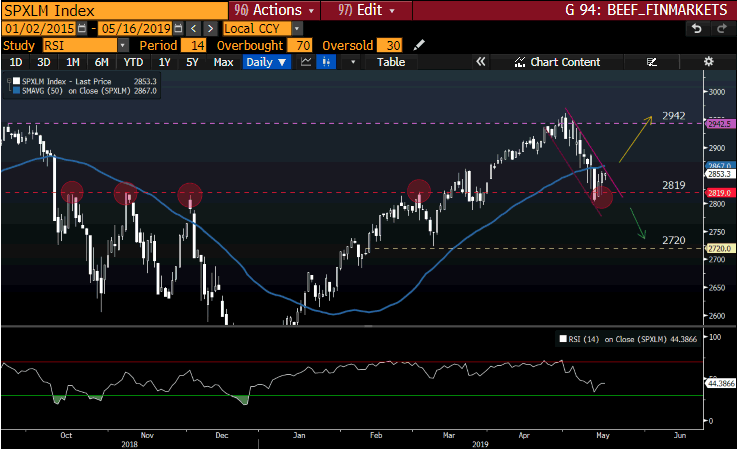 The German DAX reacted positively in late afternoon trade as fears of economic slowdown seem to have subsided for now. The German economy, the largest economy in the Eurozone released its latest GDP figures which showed the economy expanded by 0.4% in the first quarter of 2019. The German economy narrowly escaped a recession last year and have put my fears of a slowdown to bed. 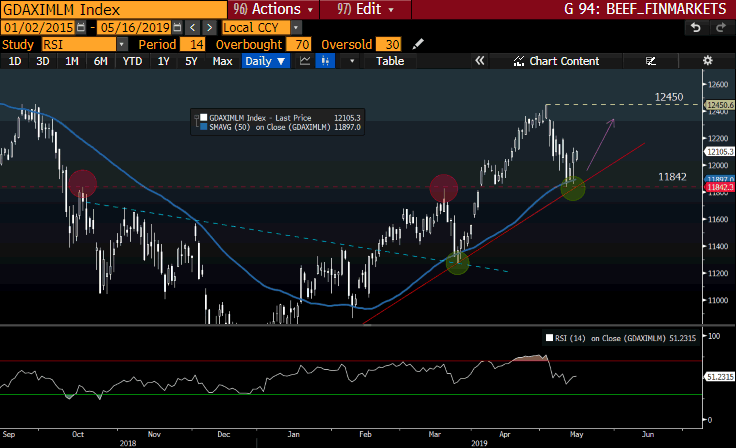 The Oil market takes centre stage once more this week as prices keep on rising as fears of supply distribution are high as Middle East tensions rise.

Brent crude has risen for its biggest weekly gain in six weeks which might continue if the OPEC + nations decide to continue with their second half of the year with supply cuts.

Bringing it back home the elections are finally over, and a new dawn is set for the country as we await the new cabinet. International Investors and Ratings Agencies alike are holding their breaths to see if the ruling ANC will include some officials accused of corruption amongst its candidates.

Some technical points to look out for on the Alsi: 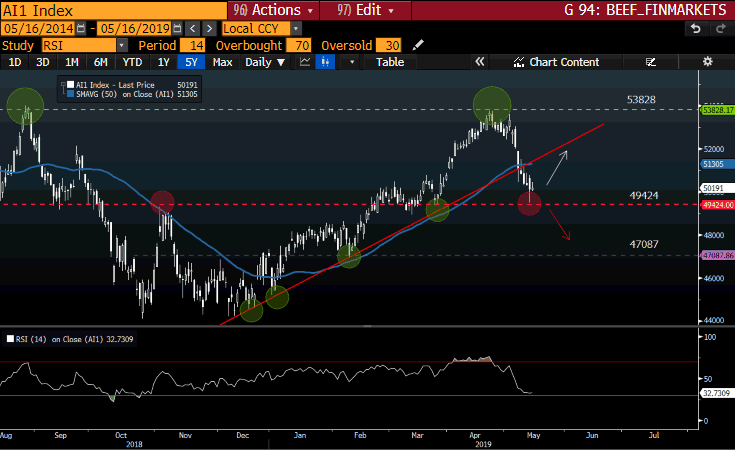