10 May 2019 / Equities and Indices / Research Notes Posted by: Barry Dumas

D-Day has arrived for the U.S-China Trade negotiations as 102 words on Twitter changed the course of the markets in an instant for the worse.

Markets have been under immense pressure as Trump stated on Sunday that he would increase tariffs on $200 billion worth of Chinese goods by 25% as of today. Negotiations are still underway to reach an agreement, but the deadline has passed, and the new tariffs will take effect. As the world holds its breath to see what counter measures the Chinese will impose the markets move lower.

Looking at the major indices around the world we can see that fear has set in as all the major indices have been selling off since Trump made his statements. Judging by the CNNMoney Fear and Greed Index we have seen a dramatic change in market sentiment over the last month.

All the major U.S Indices have been trading lower from the statements made by President Trump who stated he has an alternative if no deal is reached. Uncertainty of how the U.S-China talks will pan out remains to be seen.

Take note that volatility is expected on the U.S Indices and all major markets today.

The correlation between the S&P 500 and Brent Crude Oil is still intact and will be watched closely as the Oil market has also seen some downside this week.

The Economic data being released today to take note of: 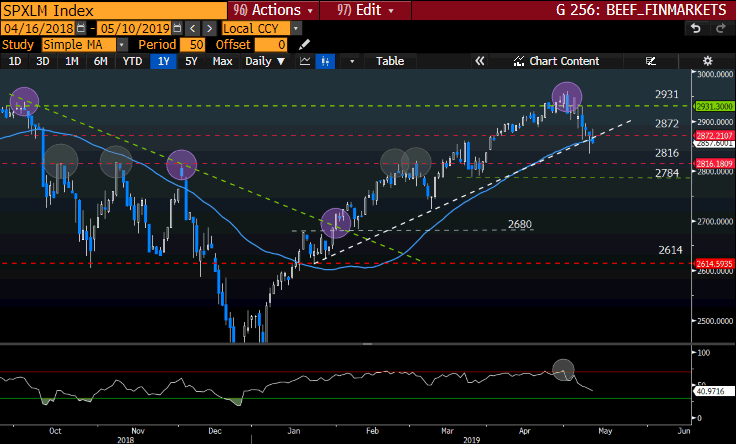 The Eurozone has not been spared from the trade U.S-China conflicts as the German Automotive suppliers Bosch and Continental do not expect the global auto market to recover soon. Vehicle demand has been slowing down, especially in China, the worlds largest car maker.

The German DAX also the Eurozone’s biggest economy has been under pressure of late but still managed a 11% gain YTD. By looking at the chart below we can see the Eurozone’s major Indices start to move lower as the U.S-China Trade dispute takes effect.

The Economic data being released today to take note of:

While the Oil market has also been under pressure the South African elections have been placed firmly in the spotlight this week.

Counting of votes are close to being finalized and it seems that the ruling ANC support will come in below 60%, the opposing DA also lower than the previous election and the EFF gaining support currently at 10%.

The below chart illustrates the YTD normalized returns of some of the major indices in the Middle East/ Africa sector. 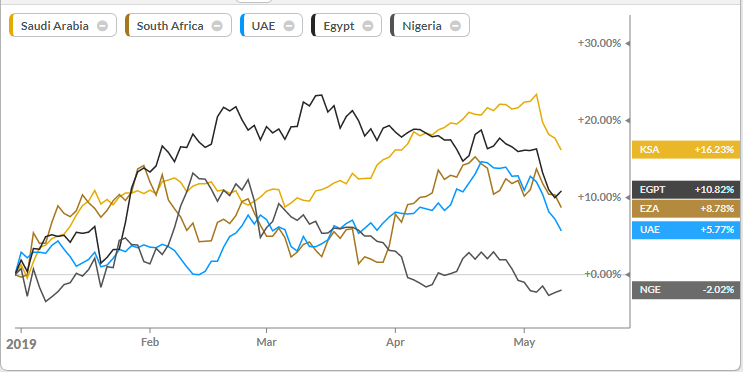 Some technical points to look out for on the Alsi: