Global stocks including the JSE weakened on Wednesday as mounting signals of a global economic slowdown surfaced.

With demand for sovereign bonds souring on safe-haven buying, the US 2-year and 10-year Treasury bond yields inverted for the first time since 2007. This is significant as most recessions in the USA have been preceded by such an inversion. An inversion is phenomena where shorter dated yields are higher than longer dated yields. This inversion combined with a contraction in German GDP of 0.1% in the last quarter saw European stocks plummet on Wednesday, while US stocks quickly erased their prior session’s gains at the open.

Other blue-chips on the JSE also struggled on the day with significant losses being recorded for Kumba Iron Ore [JSE:KIO] which tumbled 8.54% to close at R414.96, while diversified mining giant Anglo American PLC [JSE:AGL] lost 4.49% to close at R137.44. Exxaro Resources [JSE:EXX] fell 5.73% to close at R137.44 following the release of its half-year trading statement which highlighted that the company is expecting a drop in earnings. Sasol [JSE:SOL] resumed its recent decline as it lost 4.82% to close at R279.19, while Barloworld [JSE:BAW] weakened by 4.19% to close at R109.51 after the company renewed a cautionary statement with regards to its process to acquire a Mongolian based equipment dealer. 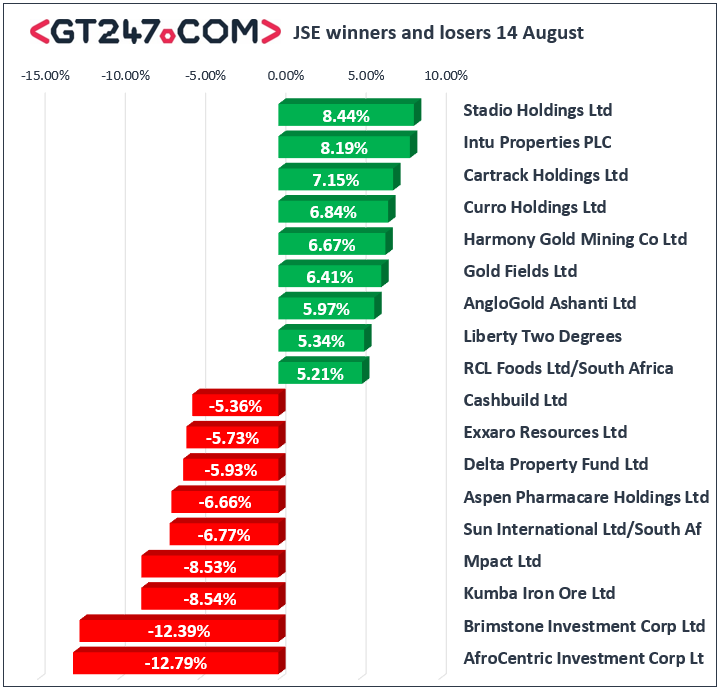 Brent crude tumbled from its overnight highs to be recorded trading 3.38% weaker at $59.23/barrel just after the JSE close.