The local bourse retreated on Thursday on the back of broad-based losses across all the major local indices.

Global sentiment was relatively mixed in today’s session as major indices in Europe traded mostly softer, while in Asia the Hang Seng slipped while the Nikkei and Shanghai Composite Index advanced. Market participants reacted to the US Fed minutes which were released on Wednesday evening which indicated that the FOMC was divided over the extent of the interest rate cuts.

Governors from the world’s biggest central banks are scheduled to meet at the Jackson Hole Symposium, as such investors will also be looking for fresh clues with regards to their stance on encouraging economic growth within their respective countries.

The rand traded firmer earlier before stronger US jobless data saw the US dollar firm against a basket of major currencies.  The local currency peaked at a session high of R15.13/$ before it was recorded trading 0.42% weaker at R15.22/$ at 17.00 CAT.

On the JSE retailers were in the spotlight following the release of a trading update by Mr Price [JSE:MRP] which highlighted an increasingly difficult trading environment. Subsequently the stock plummeted 13.7% to close at R151.46. The negative sentiment filtered onto retailers such as Shoprite [JSE:SHP] which fell 3.6% to close at R120.65, as well as Woolworths [JSE:WHL] which dropped 3.27% to close at R51.75. South32 [JSE:S32] came under considerable pressure following the release of its full-year results which showed a decline in revenue and earnings. The miner eventually closed 7.67% lower at R26.73. Listed property stock Accelerate Property Fund [JSE:APF] tumbled 12.5% to end the day at R2.80, while its sector peer Intu Properties [JSE:ITU] lost 5.09% to close at R5.97. Rand hedge Sappi [JSE:SAP] closed at R42.00 after falling 4.55%, while weaker iron ore prices saw Kumba Iron Ore [JSE:KIO] drop another 2.65% to close at R387.38. 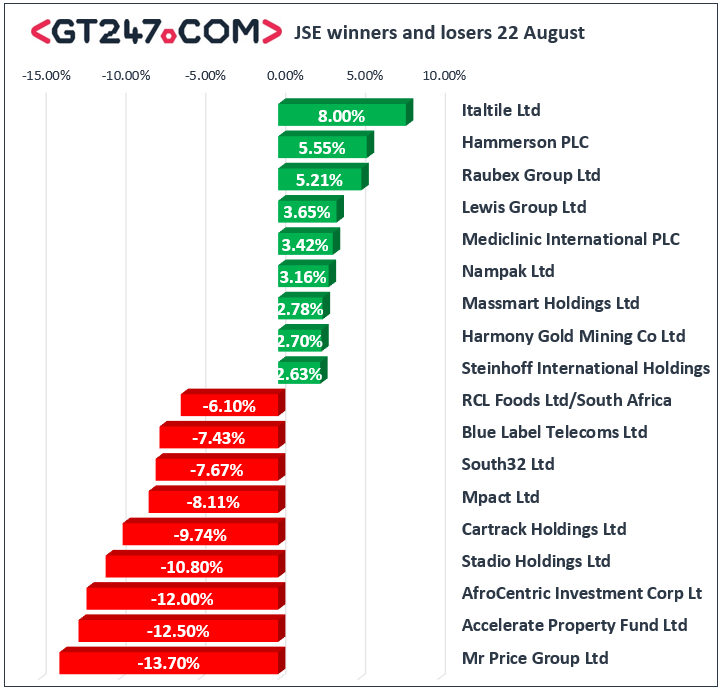 The JSE All-Share index eventually closed 0.75% lower while the blue-chip JSE Top-40 index shed 0.73%. The Financials index fell the most as it dropped 0.86%, while the Industrials and Resources indices lost 0.85% and 0.61% respectively.

Brent crude was milder following the minor overnight rally as it was recorded trading 0.88% lower at $59.77/barrel just after the JSE close.