Investors continue to be whipsawed on global markets as increased concerns surrounding global growth weigh down on equity markets. The Reserve Bank of Australia (RBA) cut interest rates by 25basis points on Tuesday to set their cash rate at 1.25%, this is the first rate cut since 2016. The Australian monetary authorities have taken a bold step to keep rates low in an attempt to kickstart their economy. The RBA could have triggered the next phase of rates cuts across global markets, as the FED and the ECB look to insulate their economies.

Asian markets closed the day mixed as Hang Seng and the Kospi 200 eased 0.18% and 0.17% respectively, the ASX 200 was up 0.71%, whilst the Nikkei 225 closed the day 0.92% in the black. European markets rebounded from session lows to edge into the black as the FEDs James Bullard indicated on Monday that the central bank had to be cautious in order to help sustain the US economic expansion. Bullard went on to suggest that an interest rate cut would be warranted given the circumstances that the US economy is in.

This morning, STATS SA released the GDP figures for the first quarter of 2019 which indicated that the South African economy had contracted by 3.2% quarter on quarter. This was the worst quarterly GDP release in 10 years. Sectors that were heavily affected in this quarter were Manufacturing which declined by 8.8%, Mining 10.8%, Trade 3.6%, Agriculture 13.2%, Construction 2.2%, Electricity and gas declined by 6.9% whilst Transport and communication were down 4.4%.  Electricity shortages were sighted as being the most significant hindrance to growth in the quarter across most sectors, the Agriculture sector was mainly affected by worsening weather conditions. What is glaring obvious to the investing public is that the South African government has a herculean task to turnaround the economy.  State owned enterprises remain a thorn in the flesh for the government as the haemorrhaging of cash endures in SOEs, such as Eskom and SAA. 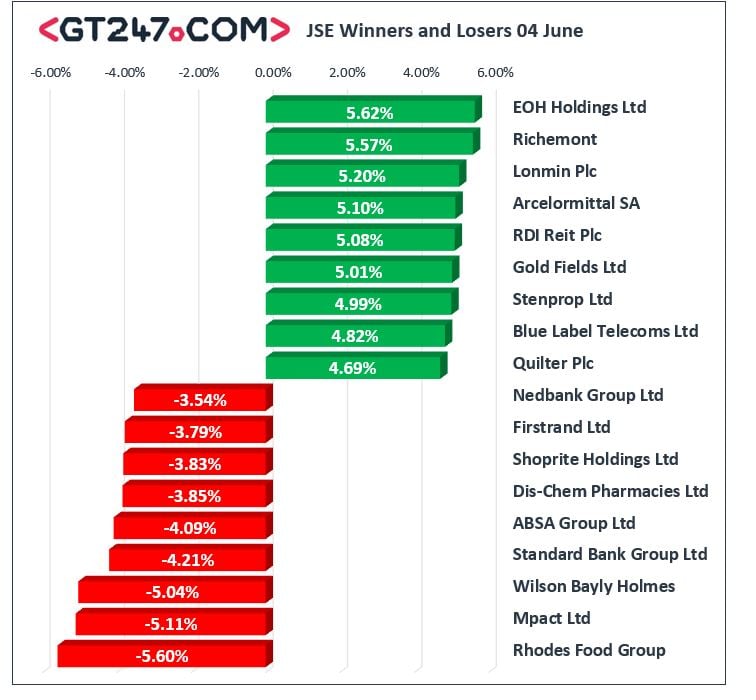 Gains were recorded by the Rand hedges on Tuesday, the gold stocks continued to rally as the gold commodity continued to rally.  The embattled technology group EOH Holdings [JSE:EOH]  was firmer on the day advancing 5.62% to close the day at 1954c. Luxury group Richemont [JSE:CFR]   notched up gains of 5.57% to trade at 11274c, miners Lonmin Plc [JSE:LON], ArcelorMittal [JSE:ACL] and Gold Fields Ltd [JSE:GFI]  posted gains of 5.2%, 5.10% and 5.01% respectively.

Brent crude was marginally softer on the day as a barrel of crude was changing hands at $60.84 per barrel at 17:00 CAT.

The Rand was weaker on the day against most of the majors as the weak GDP figures weighed down on the local unit. The local unit was also dragged lower by concerns of a potential future nuclear deal, the Rand was trading at R14.69 against the USD, R16.53 to the Euro and R18.69 to the Pound Sterling.