U.S markets have reached record highs once more on Tuesday as the world awaits the advance U.S GDP data on Friday around 14:30 SAST.

The S&P 500 reached all-time highs, reaching our target price and closed higher by 0.88% with the Dow lagging the major U.S Indices and only managed to gain 0.55%. The Tech sector had a stellar run on Tuesday with the Nasdaq up 1.32% also reaching a new record.

The Wall Street 30 index has been lagging the rest of the U.S markets in reaching new highs as earnings season gains traction. Some of the notable Companies reporting earnings today are Boeing (BA), Caterpillar (CAT), Facebook (FB), Tesla (TSLA) and Microsoft (MSFT).

Boeing (BA) will release its earnings before the U.S market open today and is widely expected to miss analysts’ expectations by some margin. Also, the news surrounding the Dow’s largest constituent has seen the share price under pressure since the tragic events surrounding the Boeing 737 MAX plane.

The latest news from the U.S-China trade tariff negotiations driving the markets are that an agreement is in sight. The U.S Trade Representatives will be traveling to Beijing next week as both sides work to reach a draft agreement as early as May.

By looking at the chart of the Wall Street 30 below we can see that the price action is closing in on our target price of 26824. We might see some downside today as the company earnings trickle in and Boeing missing estimates early in the trading session. 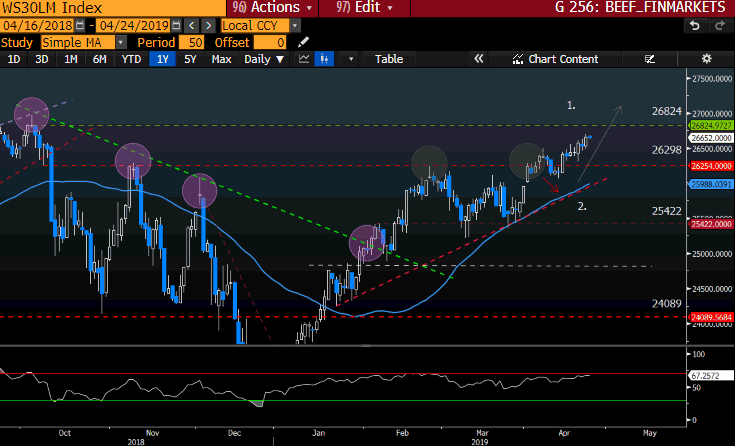