Volatility remains the only constant in world markets

Volatility remains the only constant in world markets as geopolitical factors and economic data continue to swing the pendulum from one end of the continuum to the next. It was another topsy-turvy day on the local bourse as the market opened firmer on the back of stronger earnings numbers, only to wither away in the latter half of the trading session.

Pick n Pay stores [JSE: PIK] released a strong set of results today giving credence to the turnaround strategy that management embarked on when Richard Brasher joined the group from Tesco in 2013. At face value the company looks as if it had a pedestrian half year, however if we are to strip out the once off item that relates to the severance packages paid out to staff, one can see that the retailers trading profit is up 19.3% as opposed to 4.9% as per their numbers. The market received the numbers favourably which spurred the retailers share price to close at 7500c up 613c on the day or 8.9%.  Clicks [JSE: CLS] groups grip in the retail health care sector continues as the retailer produced yet another set of strong numbers. The groups ambitions to dominate the sector may be seen in their intentions to increase their domestic footprint by opening more stores in South Africa.  Margins within the group remain healthy, giving the retailer room to increase dividends paid out to shareholders by a staggering 16.5%, the share price is beginning to look a bit pricy now trading at a forward PE ratio of 35.  The retailers share price is up 55% year on year and has added 10% year to date.

As has been the case in the last week Rand hedges Reinet [JSE: RNI] and British American Tobacco [JSE:BTI] continued their slide lower today as the two JSE giants eased by 5.12% and 6.8% respectively. Earnings out of Philip Morris [NYSE: PM] showed that the international tobacco maker anticipates that smoking rates to decline globally. Key markets for PM continue to show decline and the market expects that most cigarette manufactures would come under pressure from the Food and Drug Administration to produce cigarettes that have lower tar and addictive levels. This news out of PM can be attributed to the losses in BTI today.

Looking at some of the other movers and shakers on the day Assore [JSE:ASR] gained  9.1%, whilst Resilient [JSE:RES] recovered after the trouncing it received yesterday to close the day up 7.3%,  Fortress B [JSE:FFB]  and Green Bay Properties [JSE:GRP]  added some glitter to the REITs on the day chalking up gains of 6.87% and 5.47% respectively. 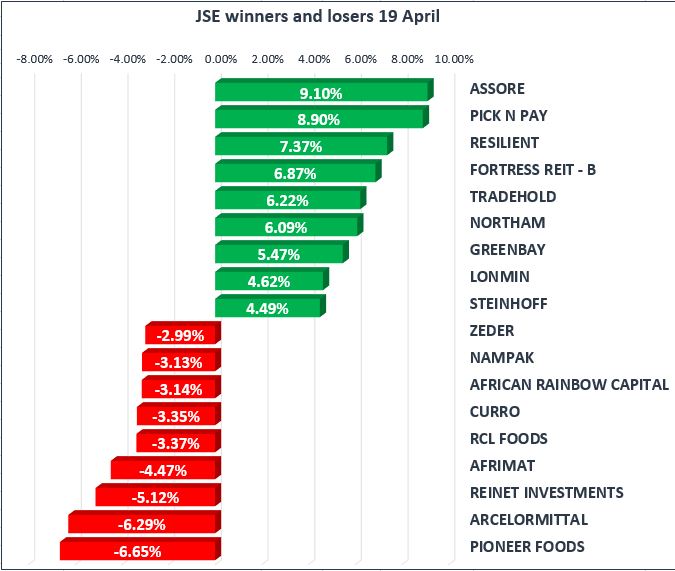 Gold bullion eased on the day as global tensions improved as more details around future talks between the USA and North Korea were released. The precious metal made a session low of $1341/Oz having traded at $1353/Oz earlier in the session. This US dollar was on firmer against most major currencies today trading at a session low of 89.90 at the time of writing.

The PGMs were weaker today after yesterday’s strong run, as platinum eased to $936/Oz at the time of writing, from a session high of $952/Oz. Palladium followed suite as the metal declined to $1031/Oz staying above the psychological $1000/Oz mark.

At the time of writing, Brent Crude was changing hands at $73.74 firmer from yesterday’s closing levels.