Volatility remains the only constant in choppy markets

Equity markets continued to lose ground on Tuesday as world markets fail to find any meaningful support.  The price action in the first session of trade was pointing to a firmer trading day, which would have been a relief rally that the market was looking for.

Asian markets were mixed on the day as the Nikkei 225 gained 1.4%, with the Shanghai index also gaining 1.02% on the day. Loses were recorded by the Hang Seng, which shed 0.91% on the day. Continued worries around further tariffs on Chinese products by the Trump administration sent shivers in the markets which sent some blue chip Asian shares tumbling.  The Asian tech shares are not out of the woods yet, tech shares continue to come under pressure as Tencent Holdings shed another 3% to trade at $252.20 HKD.

Gains were posted by AfroCentric [JSE: ACT], Mix Telematics [JSE: MIX], Lewis [JSE: Lew] and Aspen [JSE: APN] on the day gaining 10%, 8.52%, 6.48% and 4.74% respectively. The heavy weight blue chip stocks failed to fight of the bears on the day and continued their downward spiral.

Notable losses were recorded by Imperial Holdings [JSE: IPL], Kumba Iron Ore [JSE: KIO], Grindrod [JSE: GND], and Naspers [JSE: NPN], these shares shed 6.83%, 5.31%, 5% and 3.55% respectively. Naspers continues to come under pressure as tech shares the world over continue to sell off on high valuation concerns. Naspers sell off has left the local bourse in dire straits with the only glimmer of hope being the end of November Christmas rally and a political miracle in the USA. 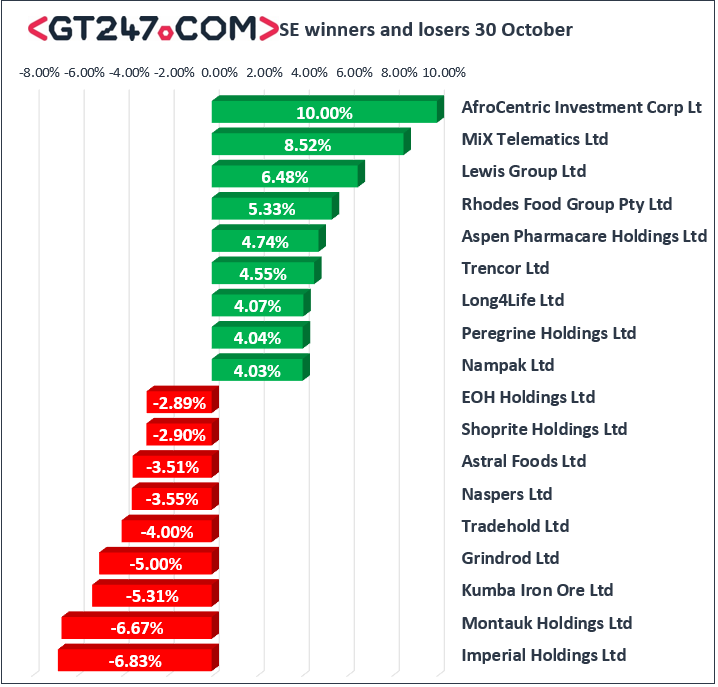 The Rand was firmer against the dollar to trade at R14.58 at 17:00hrs. The local unit was marginally firmer against the Euro and one Euro was changing hands at R16.58. The rand was also firmer against the Pound and was trading at R18.59 at the time of writing. Brexit remain a thorn in Theresa Mays flesh as a deal seems out of reach for the embattled Prime Minister.  South African 10 Year Bond (R186) yields were firmer on the day and were trading at 9.28% at 17:00 CAT.