Friday is jobs day in the U.S.—with the October Non-Farm Payrolls being released at 14:30 in South Africa. The results will set the trading tone for next week and inject some volatility into the currency market.

Last month’s jobs report was purely a reflection of Hurricane Harvey and Irma which interrupted economic activity. The impact of the storms was reflected in jobs data as Non-Farm Payrolls contracted by 33k versus the forecasted +80k. However, the previous figure was revised up from 156k to 169k. Private payrolls also fell but by a wider margin at -40K versus the forecasted +75k.

Looking at the chart below, the US dollar reacted positively for several hours to the negative numbers, largely due to the market ignoring the lower numbers due to the barrage of hurricanes. This move played into our hands as we generally expected dollar strength. 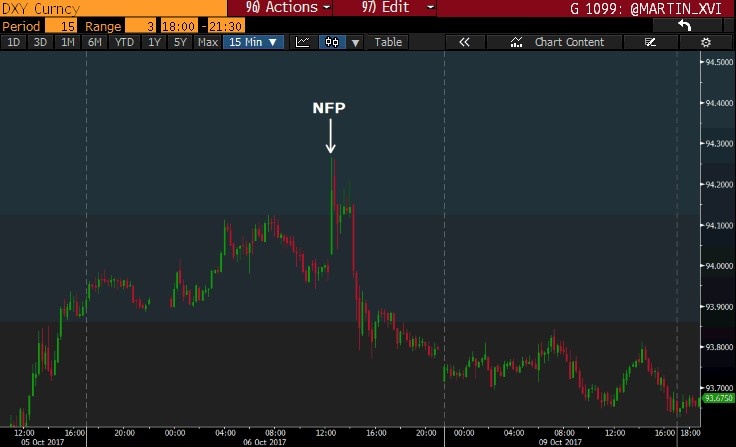 The U.S. ADP private payroll numbers released on the 1st of November give us some insight on what to expect tomorrow.


The consensus is that the U.S created 312k non-farm jobs during October – this is an obvious boost on the -33k jobs lost in September.  The market is clearly near full employment, with no change to the labour participation rate.

The United States appears to be hitting peak employment – it’s going to be harder every month to bring down unemployment because it is already low.  There is a chance for an upside surprise, given the strong ADP report.

A marked rebound in U.S. Non-Farm Payrolls (NFP) may weigh on EUR/USD as it encourages the Federal Open Market Committee (FOMC) to deliver another rate-hike in 2017, and the exchange rate may exhibit a more bearish behavior over the coming months especially as the European Central Bank (ECB) plans to carry the quantitative easing (QE) program into 2018.

Thus an upside surprise to the numbers given, would suggest increased dollar strength.