The JSE advanced on Wednesday as global markets remained upbeat on the back of a corporate earnings releases out of the USA.

A number of US listed blue chip stocks have released their earnings results which have mostly come in better than expected. This was evident overnight as BP’s profits beat estimates which resulted in gains in the US on Tuesday and on the FTSE in London. General Electric also reported better than expected revenue numbers on Wednesday which provided further impetus for gains in US indices as there was little sentiment from Asia due to the closure of markets for the Lunar new year.

Locally, there was an economic data release as the January reading of SACCI Business Confidence number was released. The number improved from a prior recording of 94.6 to 95.1. On the currency market, the rand weakened against the US dollar as the latter advanced significantly in overnight trade against a basket of major currencies. The rand slipped to a session low of R13.51/$ before being recorded at R13.50/$ at 17.00 CAT. 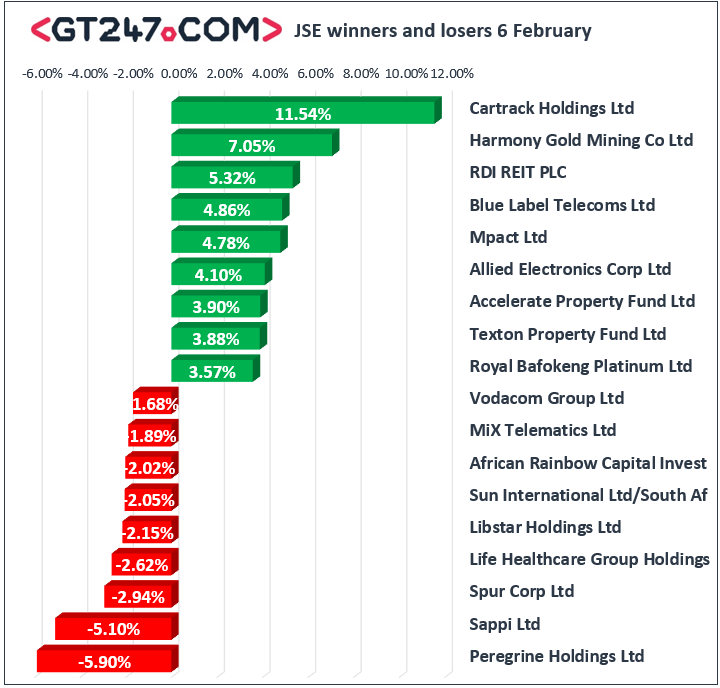 Sappi [JSE:SAP] came under significant pressure despite reporting a marginal increase in profit and earnings per share in its quarterly results.. The share fell 5.1% to close at R75.73. Gold Fields [JSE:GFI] also traded under pressure following the release of it trading statement for the full year ended 2018. The miner retreated 1.59% to close at R49.59. Ascendis Health [JSE:ASC] lost 0.76% to close at R5.21, while its sector peer, Life Healthcare [JSE:LHC] dropped 2.62% to close at R26.43. Vodacom [JSE:VOD] traded softer eventually closing the day 1.68% weaker at R116.16, while Mr Price [JSE:MRP] closed at R213.46 after shedding 1.55%.

The JSE Top-40 index managed to close the day 0.57% firmer, while the JSE All-Share index added 0.59%. The Resources index barely closed firmer after adding 0.23%. The Industrials and Financials indices gained 0.9% and 0.61% respectively.

Brent crude traded mostly softer on the day as it fell to a session low of $61.05/barrel. It was trading at $61.82/barrel just after the JSE close.