Non-Farm Payrolls are usually reported on the first Friday of the month, whereby the number of additional jobs added from the previous month is released. The US Non-Farm Payroll number for the month of February will be released locally on Friday the 8th of March 2019 at 15:30 SAST.

The Average hourly earnings (M/M) did not impressed coming in much lower at 0.1% over the expected 0.3% and the U.S Unemployment rate rose to 4.0%.

The change in private employment came in slightly lower at 183K from the expected forecast number of 190K for the month of February 2019. All eyes will look to tomorrows comprehensive Non-Farm Payrolls report (NFP), especially wage growth numbers.

The Gross Domestic Product (GDP) data released recently showed that the U.S economy did not slow down as much as what was expected, much to the surprise of analysts. It is expected that we might see yet another surprise in the Jobs number this time around. The US Non-Farm Payroll data will be used by market participants to see if the strong growth on the U.S Jobs front can continue to grow the economy.

The number of new Non-Farm jobs are expected to decrease to 181K from the previous months 304K Non-Farm jobs.

The Average hourly earnings (M/M) number is expected to increase to 0.3% the previous months 0.1% - This is a key figure to watch and if this number disappoints, it will signal a weak wage inflation outlook in the US.

The current pullback from the 26298-resistance area has seen the Dow under pressure of late and if the Jobs number disappoint we might expect more downside on the cards.

Looking closer to tomorrows jobs number we might see the price action move higher back to the 26298-resistance level if the NFP number beats expectations as shown in Point 1. Looking to Point 2, if the number disappoints we might see the sell-off continue even lower to the 25422 or the 24831-support level which might bring the 200-day Simple Moving Average (SMA) (white dotted) into play. 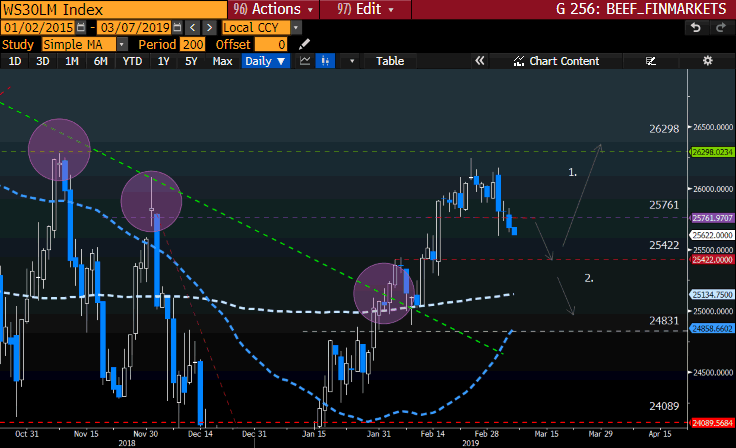