Non-Farm Payrolls are usually reported on the first Friday of the month, whereby the number of additional jobs added from the previous month is released. The US Non-Farm Payroll number for the month of March will be released locally on Friday the 5th of April 2019 at 14:30 SAST.

The Average hourly earnings (M/M) did beat expectations coming in marginally higher at 0.4% over the expected 0.3% and the U.S Unemployment rate dropped to 3.8%.

The change in private employment undershoots market estimates and came in at 129K from the expected forecast number of 183K for the month of March 2019. All eyes will look to tomorrows comprehensive Non-Farm Payrolls report (NFP), especially wage growth numbers.

U.S Economic growth is still on everyone’s radar as we saw last week with the talks of pending recession as the U.S Treasury Yield curve inverted once more. The (QoQ) Gross Domestic Product (GDP) data released for Q4 showed a slight decline from the 2.4% expected growth to 2.2%. Markets did not react as most analysts expected economic growth would be muted.

What can be noticed from the chart below is that the growth path has been on a steady decline over the last couple of quarters.

This week’s Jobs numbers will be watched closely to give an indication if the growth in the U.S work force can continue as the previous 25K jobs number did not impress.

With current Trade negotiations underway which are predicted to see the U.S-China Trade War come to an end has seen markets start to rally across the globe. An end to the tariff disputes might give the U.S economy that lift it has been longing for moving forward.

The number of new Non-Farm jobs are expected to increase significantly to 175K from the previous months 25K Non-Farm jobs.

The Average hourly earnings (M/M) number is expected to decrease to 0.3% from the previous months 0.4% - This is a key figure to watch and if this number disappoints, it will signal a weak wage inflation outlook in the US.

Renewed vigour has returned to Wall Street and we might be set for another week filled with upward momentum on the Indices. The Wall Street 30 is at a breakout point and if the Trade negotiations fundamentals pan out coupled with the technical setup the Dow might just push higher to resent highs. 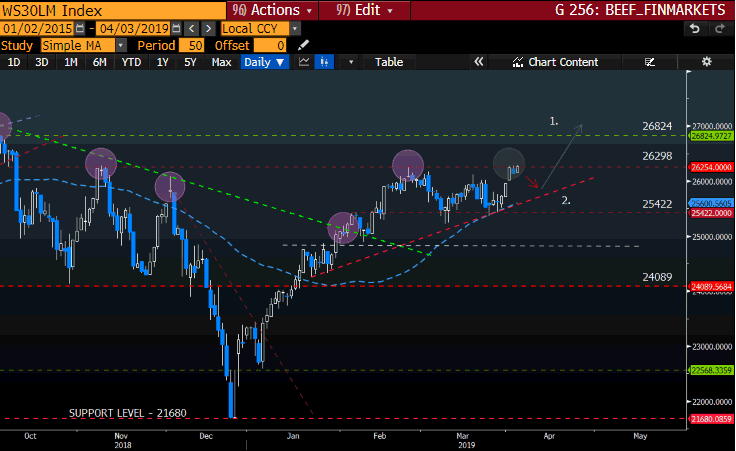