Non-Farm Payrolls are usually reported on the first Friday of the month, whereby the number of additional jobs added from the previous month is released. The US Non-Farm Payroll number for the month of August will be released locally on Friday the 6th of September 2019 at 14:30 SAST.

Market Outlook ahead of the U.S. Non-Farm Payrolls (NFP)

The start to the week sees the tit-for-tat trade disputes between the U.S. and China flare up again as the White House slapped tariffs on roughly $110 billion of Chinese imports on Sunday. Stock markets moved lower as investors moved into safe havens like Gold and Cash, which saw the U.S. Dollar (USD) gain momentum along with precious metals.

One phone call changed all the unrest in the markets as China, and the U.S. agreed to start talks again in Washington as soon as October. This is amidst the two nations realizing that a Global recession is inevitable if the disputes carry on.

We might see a surprise in the number tomorrow if the ADP jobs number is anything to go by, but the Manufacturing PMI numbers disappointed this week which might throw a spanner in the works. The Non-Farm Payrolls will be watched closely this time around and how it will impact the FED's decisions on interest rates for the rest of the year.

The change in private employment surprised and came in much higher at 195K from the expected forecast number of 148K for August 2019. All eyes will look to the comprehensive Non-Farm Payrolls report (NFP), especially wage growth numbers.

The Wall Street 30 has been consolidating over the last month mainly due to the ongoing trade disputes between the U.S. and China. The markets rallied today as news broke that the two nations would meet again to start talks in October which might finally put an end to all this madness.

Technical points to look out for on Wall Street 30: 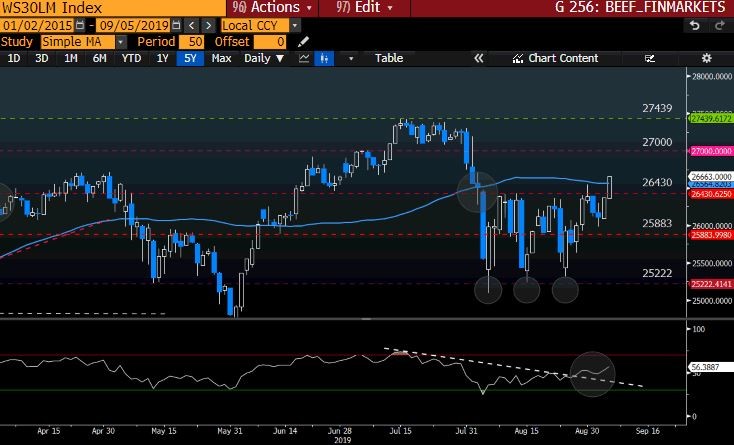 Take note: that the outlook and levels might change as this outlook is released before NFP and before the current days U.S Market open.