The world's stock markets were on sale over the last two days as the downturn continues ahead of Jobs Friday. Today's pending economic data like jobless claims, U.S Factory orders, and ISM Non-Manufacturing PMI will be watched closely.

Market Outlook ahead of the U.S. Non-Farm Payrolls (NFP)

With the latest disappointing ISM Manufacturing PMI data sparking fears of a U.S economic slowdown, has seen the manufacturing hit lows last seen a decade ago. This time around, we see the U.S play catch-up with the rest of the world as Europe sits on the brink of Recession.

The manufacturing news raised new concerns for the U.S Dollar as this might prompt the Fed to act in easing rates further. The new Quarter is not off to a great start by any means as focus turns to the U.S-China trade negotiations again.

The change in private employment is slowing down slightly in September at 135K from the expected forecast number of 140K. All eyes will look to the comprehensive Non-Farm Payrolls report (NFP), especially wage growth numbers.

Looking at the U.S. ADP Non-Farm Employment change, the number came in a bit light which begs the question of, how the Manufacturing sector is going to affect employment. We might see more pressure on the U.S economy if the Non-Farm Payrolls number disappoints significantly more than what is expected.

The Non-Farm Payrolls will be watched closely this time around and how it will impact the FED's decisions on interest rates for the rest of the year.

The downturn continues after the false breakout on the Wall Street 30 as recession fears grow, which saw the three major U.S Indices lose over 1.5%. The trade war has shifted its sights to the EU as the Trump administration announced on Wednesday that the United States would impose tariffs on $7.5 billion of goods from the European Union.

Technical points to look out for on Wall Street 30: 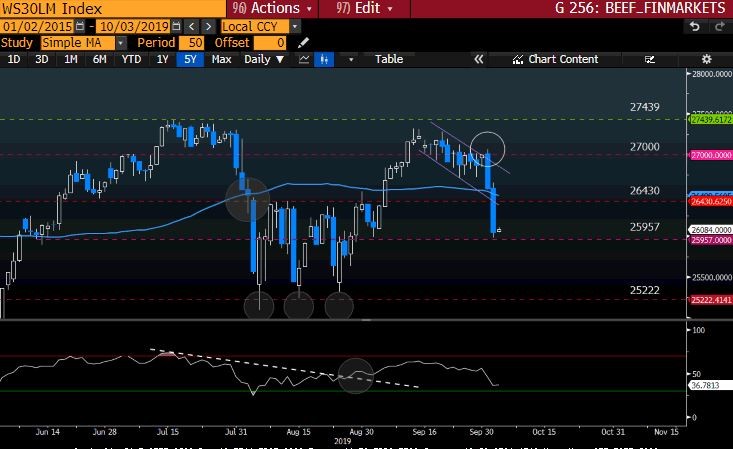 Take note: The outlook and levels might change as this outlook is released before NFP and before the current days U.S Market open.