The U.S. Federal Reserve's Federal Open Market Committee (FOMC) will announce whether the interest rates in the U.S. will decrease or remain unchanged tonight, 18th September at 20:00 SAST.

The Federal Funds rate is probably the most-watched and popular interest rate in the United States as it affects monetary and financial conditions.

The FOMC is widely expected to cut its target rate by another 25 basis points for a second time this year amidst conflicting economic data. The White House has also made it clear that more can be done by the Federal Reserve to cut rates exponentially.

All this just as an unexpected turn of events saw the overnight borrowing costs jumped to the top end of the 2.25% target rate set by the FED at its previous sitting. First time since the Financial crisis-era a decade ago that the Federal Reserve injected capital into money markets.

This $75Billion injection into the banking system through Repurchase agreements or "Repos" was to pull down interest rates after technical factors led to a sudden shortfall of cash.

The cause of this? Well, some analysts believe it might be due to the developments in the short-term funding markets which indicates that the Fed had gone too far in reducing the size of its balance sheet in recent months.

If the CME Group's Fed Watch Tool (below) is anything to go by, then there is a 56.5% chance that we might see a further easing of rates. This week's Economic and Geopolitical events have seen the rate cut go from an 81.9% certainty to today where it is close to a 50/50 chance that the Fed will cut rates. 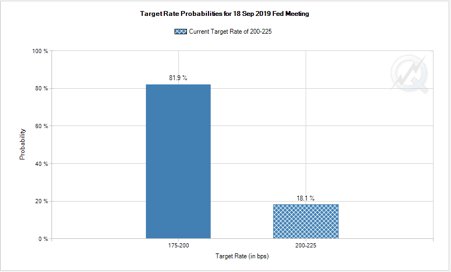 Take note: that volatility is expected on the U.S Indices and all major markets over this week, especially today with the FOMC interest rate decision.

After the last FOMC interest rate announcement, which saw the central bank cut rates by 25 Basis points, the Dollar did the unexpected and started to gain strength. This can be attributed to the market conditions that reigned at the time which saw the U.S Dollar as the safe-haven of choice along with Gold.

Yesterday's unexpected "Repo" expenditure coupled with the uncertainty in the Oil market, has seen the U.S Dollar lose some steam. The greenback has been in a steady uptrend over the last couple of months but might lose some momentum if we see a rate cut. The 97.70 support level and the 98.85 resistance level will be watched closely as the rate decision nears. 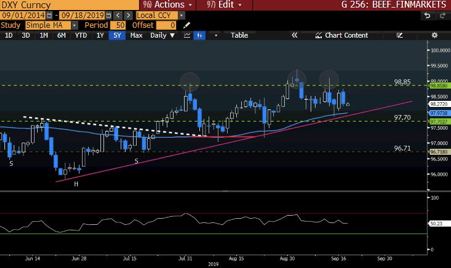 The Wall Street 30 index is still holding above the critical 27000 support level before the rating announcement. We might see the Index target 27439 if the interest rates are lowered, but if the previous sitting is anything to go by the opposite will happen. A close eye will be on the 50-day SMA (Blueline) for support if the 27000 level does not hold.

Tech stocks have also not been spared from the wrath of the Trade War but has managed to claw their way back into the investor spotlight. The Nasdaq is currently pausing above the 50-day SMA as we wait for a possible easing of rates by the U.S Federal Reserve. 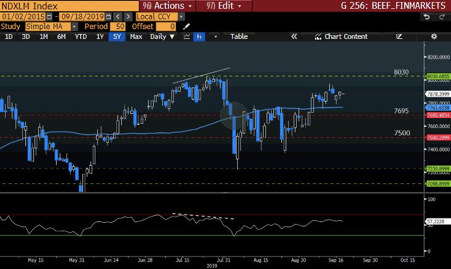 The S&P 500 is probably the most-watched U.S Index and is also just managing to stay above the 3000-support level. We might see all-time highs once more on the S&P 500 if interest rates are lowered later tonight SAST. A possible target level of 3050 might be reached as market participants start to jump on board later tonight into the Asian session. 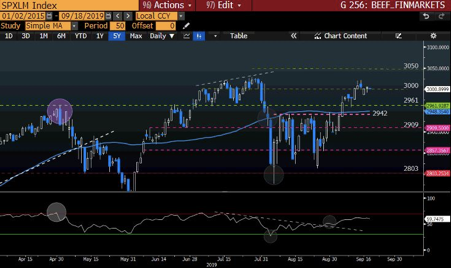 A decrease in U.S interest rates will possibly see the Dollar (USD) weaken, so look at the following:

The inverse is applicable where there is a decrease in interest rates it might have a positive effect on equities, so look at the following Indices: