The JSE retreated to close weaker on Friday as it tracked other major global indices lower.

The moves lower across most equity markets were triggered by Donald Trump’s threat for increased tariffs against Mexico in retaliation to the influx of immigrants into the USA from Mexico. The USA is already in a full-fledged trade war with China, and this latest development with Mexico raises more concerns for investors who are struggling to fully comprehend the impact of that trade war with China.

In Japan the Nikkei fell 1.63%, in Hong Kong the Hang Seng lost 0.79% while in mainland China the Shanghai Composite Index lost 0.31%. In Europe all the major indices were down by more than 1% on average while the USA’s major indices opened considerably lower.

The rand managed to recoup some of the losses that it has taken over the past couple of sessions as it advanced on Friday. The strength in the rand was mainly due to the weakness that was recorded in the greenback as indicated by the US dollar index which traded marginally softer. The rand had peaked at a session high of R14.53/$ before it was recorded trading 1.09% firmer at R14.56/$ at 17.00 CAT. 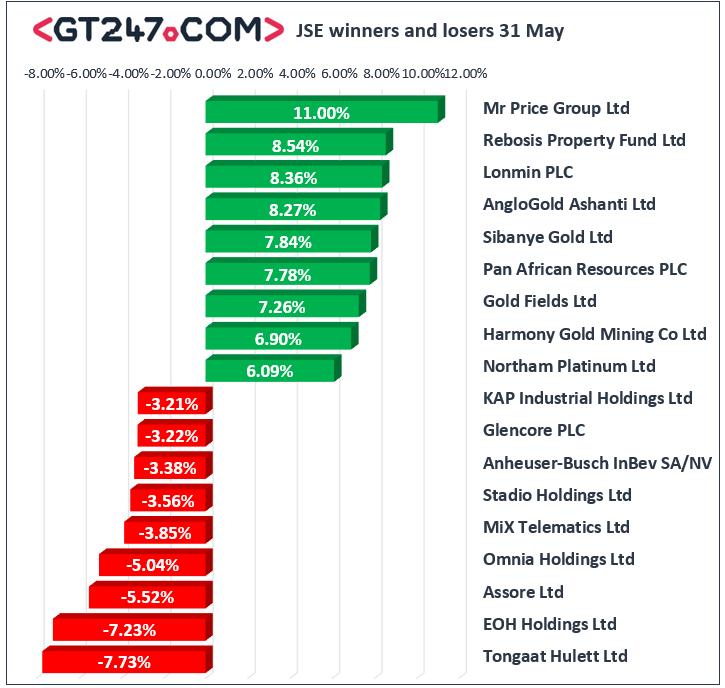 The JSE All-Share index closed 0.31% lower while the blue-chip JSE Top-40 index lost 0.39%. The Resources index fell 1.42%, while the Financials and Industrials indices barely closed firmer as they added 0.27% and 0.02% respectively.

Brent crude weakened significantly because of Donald Trump’s tariff threats against Mexico. The commodity was trading 2.62% weaker at R63.62/barrel.