Trump coins up USMCA as “new deal for NAFTA”

The local market bounced on Monday ahead busy week on the world economic data front.  The Non-Farm payroll numbers will be the highlight of the week, these numbers will be released on Friday the 5thof October.  South African motorists will face a 99c petrol increase on Wednesday, sending the petrol price to all-time highs at the coast and inland.

The Nikkei advanced on Monday adding 0.52% to trade at 24245 points.  Equity markets were closed in China and Hong Kong today for their National day holiday. There was thin trading in the Japanese market today as most investors shied away from the markets today.  Despite the public holiday in China today we saw manufacturing data being released today.  The Caixin Manufacturing PMI number came in at 50.0 down from 50.6 which also missed the markets expectation of 50.9.

Alexander Forbes [JSE: AFR] announced that they have appointed Dawie de Villiers as their new Group Chief Executive.  Mr de Villiers replaces Andrew Darfoor, he will assume office of the CEO from 1 November 2018 from interim Group chief executive Ms Marilyn Ramplin.  The insurers share price was up 12.53% on the back of this announcement, as a sense of confidence has been restored at the helm. Arcelormittal [JSE: ACL], Invicta [JSE: IVT], and Raubex [JSE: RBX], made key moves in the black on Monday notching up gains of 8.9%,6.73% and 4.7% respectively. 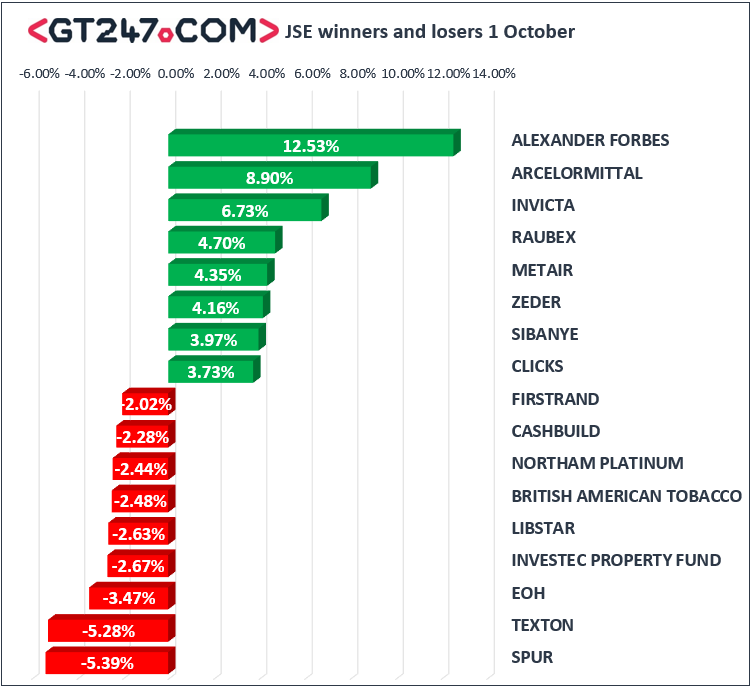 Monday saw the end of NAFTA as the “unfair deal” was relegated to the abyss of history and a deal which Donald Trump believes will be better for America was tabled to the members. The road ahead is not going to be easy for the three neighbours,  but this provides a platform for greater cooperation in the future.

Commodities were generally softer on the day as gold pulled back to $1187/ounce. Brent crude continued to advance as the market speculates that stiffer sanctions will be levied against Iran.  Market analysts predict that if the situation does not go unchecked all prices could retest the $100/ barrel mark before the end of the year.  At the time of writing a barrel of Brent Crude was changing hands at $83.22.