The global economy has been on a knife’s edge of late with an economic slowdown in Europe and China sparking global recession fears once again. The U.S-China trade negotiations are dragging on with no real resolve in sight as central bankers prepare to meet at Jackson Hole.

President Trump has stated that there is no chance of a U.S recession and that the FED should act and reduce interest rates significantly. The central bankers meeting this weekend at Jackson Hole might deliver some insight to which direction the policymakers are leaning.

The U.S Recession Probability Index from Bloomberg has risen significantly from a week ago and has now crossed into the danger zone. The chances of a U.S recession is on the rise as market participants wait for the FED chair Jerome Powell talks at Jackson Hole for direction. 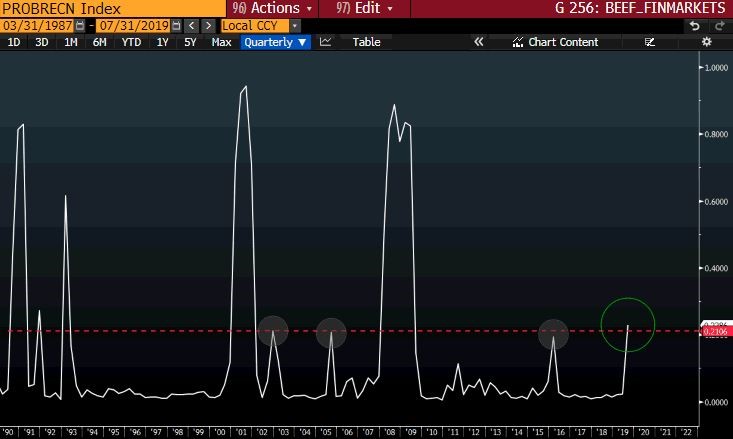 So, what has happened to the Yield Curve you may ask? Since the yields on the U.S 2-year and U.S 10-year Treasury notes inverted for the first time since 2007, the markets have been on edge. Most analysts expect another move lower on the Treasury yields, but the FED meeting minutes might have curbed their enthusiasm.

One of the other leading economic indicators to watch is Korean exports which remain in a clear downtrend along with the major U.S 10-year Treasury Yields. Korean exports are looked at because they ship to several regions, which allows us to gauge how well the global economy is doing.

The July FOMC meeting minutes were released Wednesday evening, and it is clear that most FED officials viewed the rate cut as a mid-cycle adjustment. Federal Reserve officials who voted to lower interest rates three weeks ago agreed that the move shouldn’t be considered as an indication that there is a “pre-set course” for future cuts, according to meeting minutes released Wednesday – CNBC

The S&P 500 has been consolidating below the 2942 resistance level for some time now and is looking for direction. If recession fears persist, then the major index might start to move lower from current levels.

We would need to see the price action move higher and close above the 2961 level to negate the downward movement on the S&P 500. 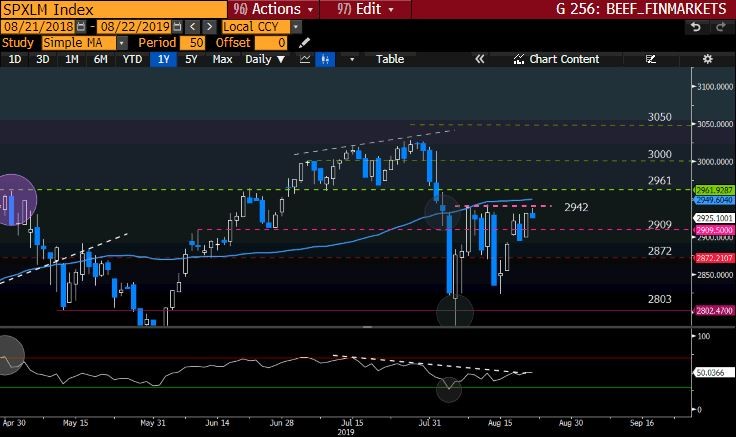