With so much happening across the globe, tensions remain high between nations looking for a way forward without conflict. The Chinese have extended a couple of friendly gestures over the weekend and that a face to face meeting could happen soon between top U.S-China officials.

With the major U.S Indices retreating from the recent all-time highs we might expect a subdued outlook until the long-awaited announcement from the FOMC. The FOMC’s interest rate decision on the 31st of July is widely expected to see a 25-basis point cut in interest rates.

Bond yields have started to pick up on Monday with the U.S 10-year and 30-year Treasury bond yields gaining traction.

We can see the S&P 500 is trading below the recent 3000 level which has acted as resistance to the price action pushing higher once more. The price action needs to clear and close above the 3000 level to support another leg higher. 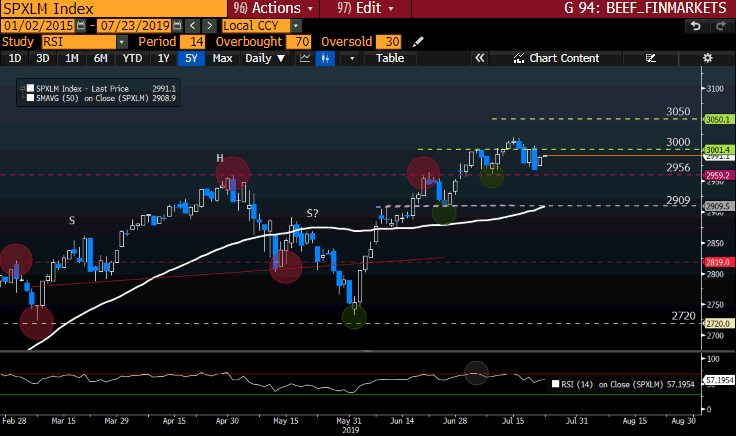 The next key event to take note of will be the ECB’s interest rate decision on Thursday around 13:45 SAST, which is expected to remain unchanged. With Christine Lagarde set to replace current ECB President Mario Draghi. It will be interesting to see how monetary policies will take shape after Draghi is gone.

The price action is also supported by the 50-day Simple Moving Average (SMA) (white line) now and will also be watched closely. 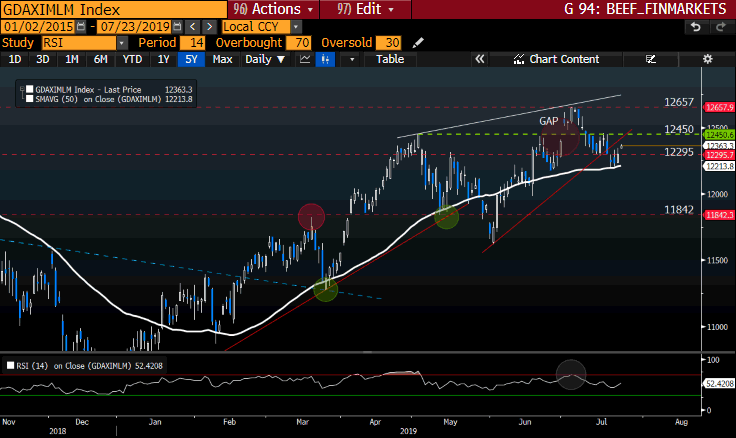 The South African Reserve Bank (SARB) cut its interest rate by 25 basis points last week to start stimulating the economy. With a further two interest rate cuts on the cards over the next couple of months leading to January 2020. Failing SEOs have been a talking point once again as Eskom is about to receive a R59 Billion injection over the next two years from the state.

The Rand (ZAR) was less affected by the interest decision and gained strength after the announcement. Not what one would typically expect after a rate cut, but it seems that volatility in Emerging Market currencies has piqued the interest of market participants.

The ALSI has been losing momentum with the Rand (ZAR) gaining strength against the U.S Dollar, which might see some more downside for the ALSI. The next support level at 50905 will be the next major level to watch as a move lower from there could target the 49424 level.

The U.S-China trade negotiations might have a positive effect on the local economy, which might drive the ALSI higher from current levels. 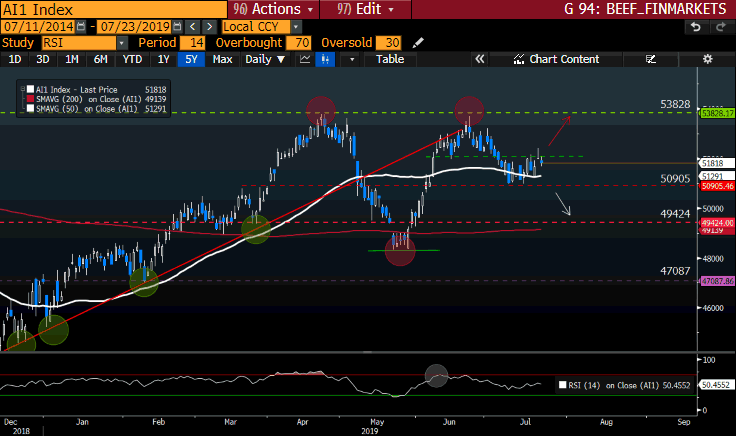