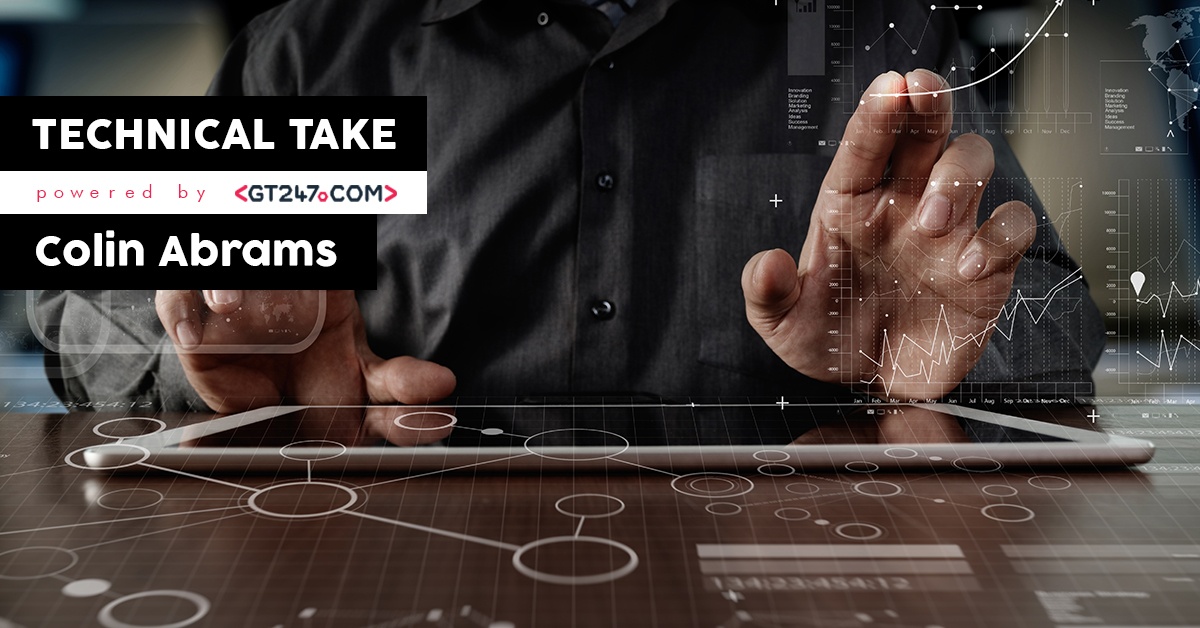 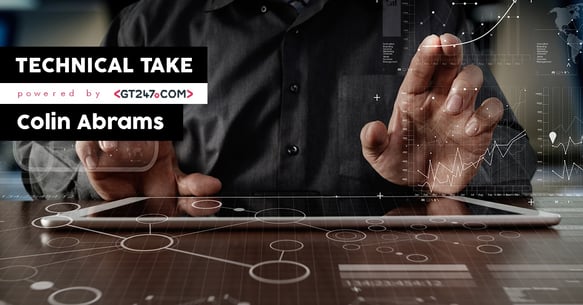 Despite the local and overseas market being very overbought they both continue to move higher, with the JSE All Share index rally powering up sharply. A host of bearish reversal candles in recent days have been totally ignored, and that is a sign if real strength. It seems like the index wants to make/test its all time high before selling off. Either way, this doesn't change the fact that world markets are dangerously high. A correction can still start at anytime, but because we’re heading into month-end, they’ll probably hold up until then.

The S&P 500 is now reaching its upside target of 2479. I still believe it’s living on borrowed time. The JSE All Share index chart is not far from its all time high, but shows numerous bearish signs developing as shown here. The JSE findi 30 (financial and industrial) index is testing its all time high and is overbought. On the currency front the EUR/USD is reversing down from long-term resistance for shorting the euro. Stock charts shown are Gfields (building up for a breakout), Discovery (higher target still) and Telkom (shortable).

Overall, the market is defying the odds right now by continuing higher. It can still go a bit further but remains dangerously high. Short-term traders should be careful not to get sucked in right at the top. My view remains one of great caution, with a view to potentially shorting the main indices locally and oversees for a correction. Thereafter we’ll be looking for long signals again.

JSE ALL SHARE INDEX – All time high in sight

Current Trend: Short-term up but overbought. Med and long-term sideways.

Strategy: Sell short a breaking of its prior two-day low, or a reversal week down (more conservative). 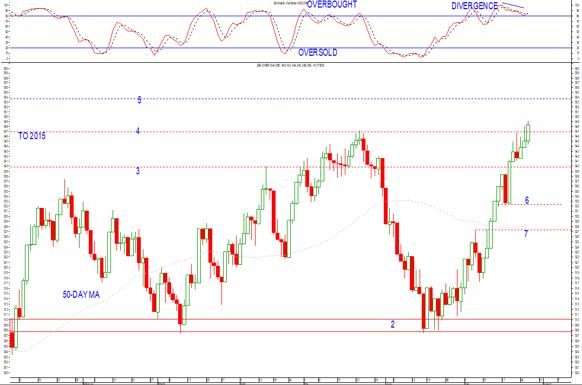 Chart Setup: The All Share index gave a classic reversal candle down on Friday from line 4. On Tuesday we got another classic reversal candle down. However neither candle has had its low broken to trigger the short entry. [Remember it has to break the low of a reversal day down to trigger the entry; and vice versa for a reversal day up. A reversal day/candle on its own is not reliable enough]. We are seeing a preponderance of bearish candles though and this points to a sell-off to come.

Strategy Details: Sell it short on an intraday break of its prior two-day low, given that we have bearish reversal candles. As mentioned last week, this is still a fairly aggressive signal because it’s against the trend. A reversal week down will be the more conservative entry. (Another option is a close below the previous day’s low).

Stop-loss: A close above the high of the current rally. From 53 500 lower the stop to a breaking of its prior two-day high. Then prior one-day high from 52 800.

Chart Setup: Interestingly Gfields is doing very well relative to the other gold stocks, and has been moving up since mid-June. It’s moved sideways over the past two weeks in a small channel (lines 3 and 4), and looks to be waiting for reason to go higher. In fact yesterday it closed slightly above line 4. I'm looking for follow through here. The current move has also taken it above line 2 of a large triangle.

Target: If we get that breakout the initial target (T1) is R53.20 i.e. the height of channel 3-4 projected up. Short-term traders can take some profits there. That move will also activate a higher target (T2) to R58.20, based on triangle 1-2 projected up.

Current Trend: Short-term up. Med and long-term sideways to up. 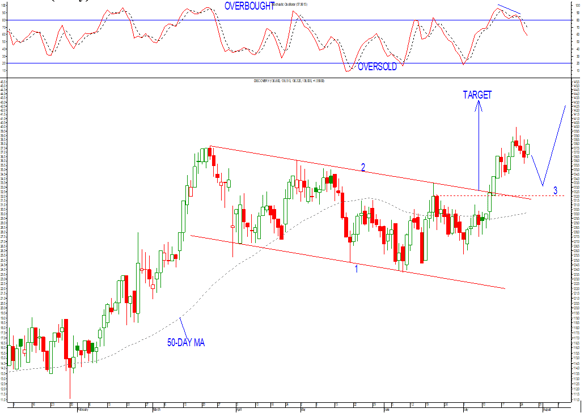 Chart Setup: Discovery has so far reached two of our three upside targets given here recently. The trailing stop (prior two-day low) locked in remaining profits this week. While it rallied yesterday I would like to see more of a pullback before buying again. There is still a higher target based on channel 1-2.

Stop-loss: A close below R132.00. Once it trades back above last weeks high i.e. above R140 raise your stop to breakeven (entry price). Then from 141.50 raise it again to a breaking of its prior two-day low.

TELKOM – Vulnerable to a sell-off again 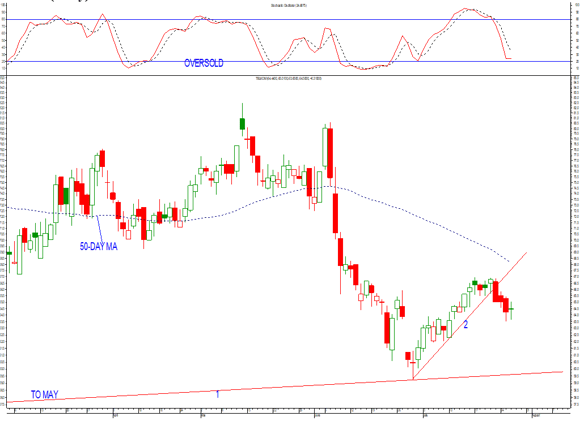 Chart Setup: After giving a recent relief rally, Telkom has broken down below line 2 support and looks to be heading lower.

Strategy Details: Sell short either an intraday break below R63.60 (below yesterdays low), or from R66. Do whichever happens first

While the markets are powering ahead right now, one has to take a step back and ask where will they be in a week or two time, and then in a months time?  I believe we’re in a classic below-off top situation (short-term at least). This is where the so-called smart money is taking profits into strength. Be very careful about buying after an extended up move, it’s a low-odds proposition.

Look for a pullback to be buying again, because after a correction I believe the market will still go higher before any ‘final’ top is in. That applies locally as well as to the S&P 500 index.

Resources stocks have had a big run in recent days. They can still go a bit higher, but a correction there will be very ‘telling’ with regards to whether this is the start of a new med-term rally or not. Some of our resources recommendations have done very well of late, and this is an area to be watching very closely right now. The next week will be very ‘important for garnering more info about its intentions.

Wishing you profitable trading until next time.