The local bourse extended its declines on Wednesday as global markets awaited the interest rate decision from the Fed.

The Fed which has had to intervene in the US money markets via the injection of liquidity on Tuesday and Wednesday, has become the focus of investors globally. More focus will be on the press conference following the interest rate decision for more clues on how the Fed plans to help spur economic growth given that the ECB has already taken on quantitative easing. The Fed’s rate decision is expected at 20.00 CAT on Wednesday. 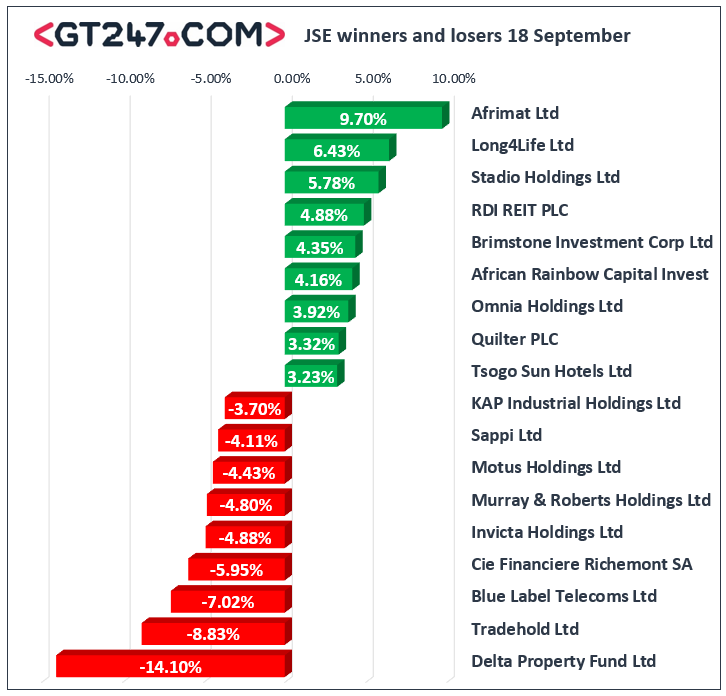 Blue chip stocks recorded rather modest gains in today’s session. Bid Corporation [JSE:BID] gained 1.87% to close at R326.74, while Kumba Iron Ore [JSE:KIO] managed to post gains of 1.15% to close at R415.00. Retailers were bolstered by the firmer rand which saw gains being recorded for Shoprite [JSE:SHP] which gained 2.485 to close at R128.49, while Truworths [JSE:TRU] advanced 1.24% to end the day at R57.09. Other significant gains on the day were recorded for Afrimat [JSE:AFT] which rallied 9.7% to close at R32.79 following the release of a positive trading statement, as well as Quilter [JSE:QLT] which advanced 3.32% to close at R25.83.

The blue-chip JSE Top-40 index eventually 1.45% weaker while the broader JSE All-Share index gained 1.21%. The Financials index was the only major index to record gains as it closed 0.23% firmer. The Industrials and Resources lost 2.3% and 0.44% respectively.

Brent crude swung between gains and losses as traders tried to gauge news out of Saudi Arabia given the recent attack on its pipeline. The commodity was trading 0.51% lower at $64.19/barrel just after the JSE close.