Stocks softer ahead of US interest rate decision

Stocks softer ahead of US interest rate decision

The local bourse slipped further on Wednesday as pessimism persisted on the back of weaker earnings and lower risk appetite ahead of the US Fed rate decision.

The tone is Asia was more bearish as heavier losses were recorded for the Hang Seng which lost 1.31%, while the Shanghai Composite Index fell 0.9%. In Japan the Nikkei closed 0.86% weaker. In the USA where the Fed is expected to announce its interest rate decision at 20.00 CAT, markets opened flat as investors struck a cautious tone. The Fed is widely expected to cut rates by 25 basis points to 2.25%. Notwithstanding any surprises, there is expected to be significant volatility for the US dollar and global stocks regardless of the decision.

Another volatile session ensued for the rand which retreated to a session low of R14.24 against the greenback before it found some momentum in the afternoon session to peak at a session high of R14.14/$. The rand was trading 0.21% firmer at R14.17/$ at 17.00 CAT. 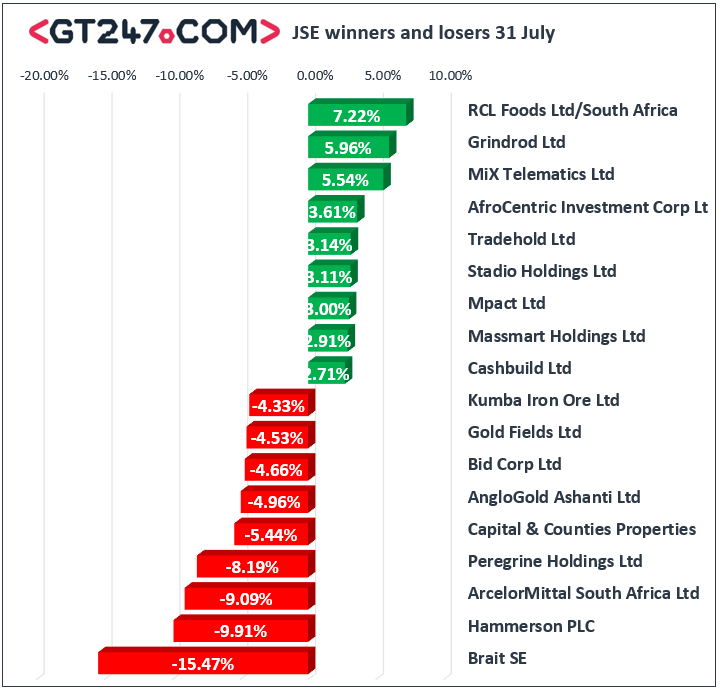 On the JSE, Intu Properties [JSE:ITU] tumbled 30.64% to close at R8.40 following the release of its half-year results which highlighted substantial downward pressure in terms of rental income and property values. Capital and Counties [JSE:CCO] and Hammerson PLC [JSE:HMN] which also have significant property investments in the United Kingdom also came under pressure as they lost 9.91% and 5.44% to close at R37.20 and R34.05 respectively. Brait [JSE:BAT] could not catch a reprieve as it fell 15.47% to end the day at R11.80. AngloGold Ashanti [JSE:ANG] retreated despite a positive half-year trading statement as the stock lost 5.37% to close at R253.82, while its sector peer Gold Fields [JSE:GFI] lost 4.53% to close at R76.04.

The JSE Top-40 index eventually closed 0.8% weaker while the broader JSE All-Share index shed 0.66%. The Resources index came under significant pressure as it lost 1.1% while the Industrials and Financials indices lost 0.37% and 0.84% respectively.

Brent crude crept up even more as US inventories data indicated another drop in last week’s stockpiles. The commodity was trading 0.45% firmer at $64.93/barrel.