The JSE got off to a firmer start this week as it tracked other global stocks higher, after the USA signaled progress in the trade talks with China.

Concerns about a recession took a backseat as investors sort after riskier assets on the back of this positive news. In Hong Kong the Hang Seng surged 2.17% while in mainland China the Shanghai Composite Index also gained 2.17%. In Japan, the Nikkei gained 0.71%. Counters in Europe all tracked higher while in the USA all the major indices rallied by more than 1% after the open.

On the currency market, the rand slipped against the greenback despite the latter tried mostly flat on the day against a basket of major currencies. After having peaked at a session high of R15.20/$ earlier, the local currency retreated to a session low of R15.44/$ before it was recorded trading 0.81% weaker at R15.41/$ at 17.00 CAT. 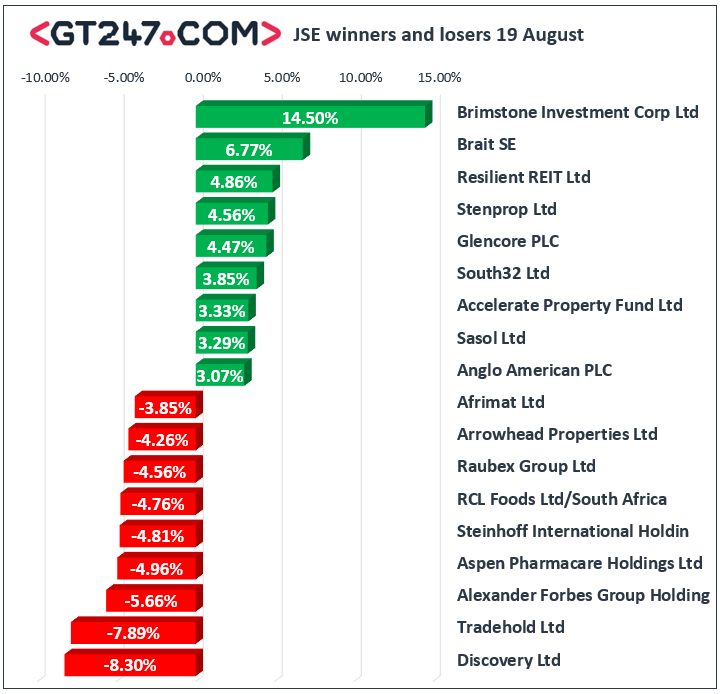 Discovery Ltd [JSE:DSY] quickly erased most of Friday’s gains as it fell 8.3% to end the day at R101.47, while pharmaceutical giant Aspen [JSE:APN] lost 4.96% to close at R65.91. Steinhoff International [JSE:SNH] reached a new all-time low of R0.97 before it closed 4.81% weaker at R0.99. Blue Label Telecoms [JSE:BLU] came under pressure after the company released a weaker trading statement for its full financial year, and it also announced a delay in the release of its financial results. The stock eventually closed 3.51% weaker at R3.30. Other significant losers on the day included Bidvest [JSE:BVT] which dropped 2.785 to close at R174.00, Massmart [JSE:MSM] which fell 1.49% to R44.23, and MTN Group [JSE:MTN] which closed at R103.55 after dropping 1.39%.

The JSE Top-40 index eventually closed 1.11% higher while the broader JSE All-Share index gained 1.02%. All the major indices advanced in today’s session with the biggest being the Resources index which rallied 2.11%. The Industrials and Financials indices added 0.96% and 0.22% respectively.

Brent crude traded mostly firmer on the day, and it was recorded trading 1.07% firmer at $59.24/barrel just after the JSE close.