The JSE closed softer on Friday in line with global markets which retreated despite robust US jobs numbers.

Concerns over the coronavirus seemed to creep back in as momentum faded across most major global markets. In Shanghai, the main equity benchmark was unchanged at the close, while the Nikkei and Hang Seng retreated 0.19% and 0.33% weaker. Weaker German industrial production numbers released on Friday played a factor in the weakness recorded in Europe where all the major indices retreated. The main equity bourses in the USA also opened lower to start off the session.

With speculators betting on the possibility of a US Fed rate hike given the better than expected jobs numbers, the greenback advanced against most emerging market currencies. The rand was not spared as it breached R15/$ to reach a session low of R15.10/$. At 17.00 CAT, the rand was trading 1.32% weaker at R15.09/$. 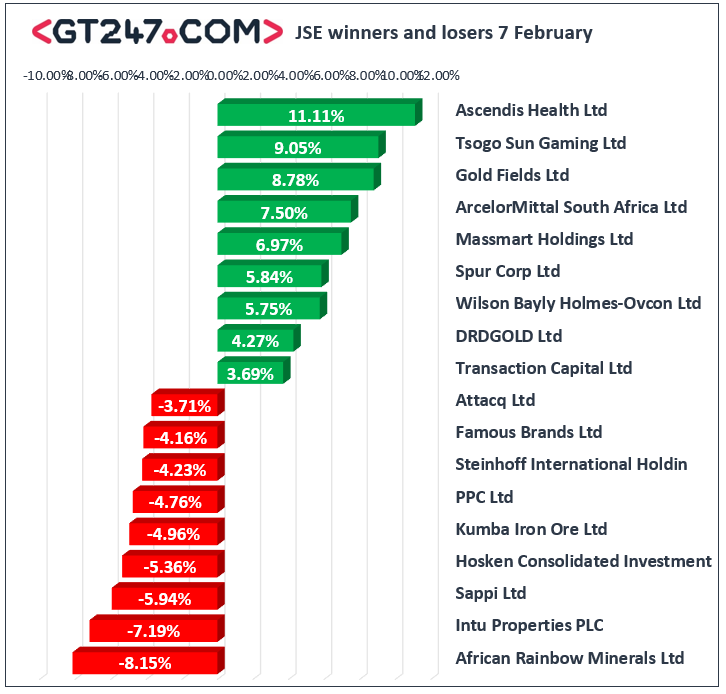 Tsogo Sun Gaming [JSE:TSG] found some traction following four consecutive sessions of losses. The share surged 9.05% to close at R10.96. Gold miners also found some momentum with gains being recorded for Gold Fields [JSE:GFI] which added 8.78% to close at R103.19, while AngloGold Ashanti [JSE:ANG] managed to gain 3.31% to close at R297.02. Mediclinic [JSE:MEI] was buoyed by the announcement that it had gained approval for the acquisition of Matlosana hospitals in the North West. The share eventually closed 1.33% firmer at R74.56. Gains were also recorded for Barloworld [JSE:BAW] which gained 2.43% to close at R101.77, as well as Rand Merchant Investment Holdings [JSE:RMI] which closed at R28.39 after gaining 1.43%.

The JSE All-Share index eventually closed 0.45% lower while the JSE Top-40 index dropped 0.44%. The Resources index was unchanged at the close, while the Industrials and Financials indices dropped 0.16% and 1.22% respectively.

Brent crude lost more ground in today’s session as it was recorded trading 1.09% lower at $54.33/barrel just after the JSE close.