Stocks remain buoyant as US stimulus bill is passed

The JSE extended its gains on Wednesday on the back of strong gains in earlier trading from Asian markets.

The rise was linear for all the major indices particularly for US equity benchmarks which whipsawed between gains and losses. Extensive gains were recorded for the Nikkei which rocketed 8.04%, while the Hang Seng and Shanghai Composite Index added 3.81% and 2.69% respectively. Stocks in Europe where mixed as the DAX and Euro Stoxx 50 came under pressure while the FTSE 100 and CAC 40 advanced. The Dow Jones recorded solid advances after the announcement that Congress had agreed to a $US2 trillion stimulus bill, while the S&P 500 struggled to hold on to the gains.

GT247, South Africa's Top Online Stockbroker, as voted by Intellidex, will continue to operate their powerful MT5 trading platform during the COVID-19 lockdown period. The trading team has assembled their workstations at home and are operational remotely. Clients may experience slight delays in support queries but trading online will resume as normal. 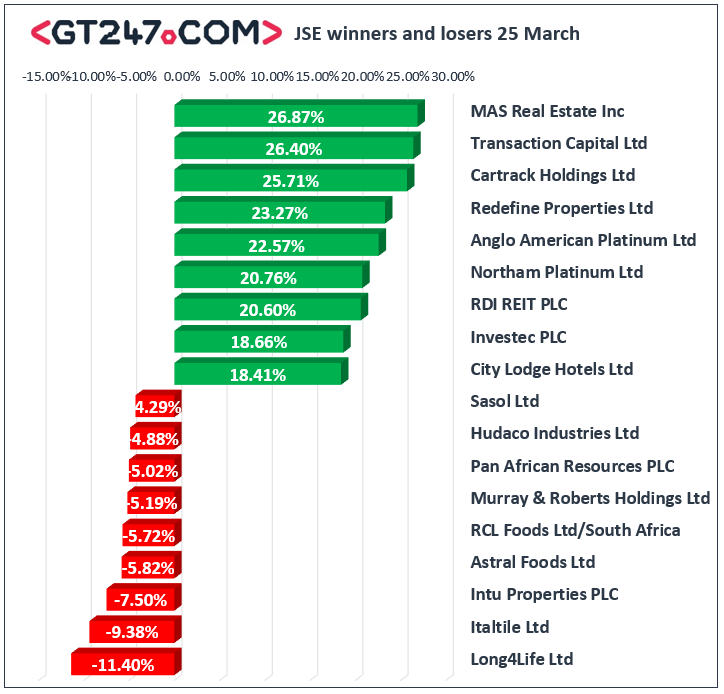 The JSE All-Share index eventually closed 5.17% higher while the JSE Top-40 index also rallied 5.17%. The Resources index recorded gains of 7.94%, while the Industrials and Financials indices added 3.24% and 6.27% respectively.

Brent crude slipped in today’s session as it was recorded trading 1.4% weaker at $26.73/barrel just after the JSE close.