Stocks rebound to lift the JSE

Most of the blue-chip stocks which closed sharply lower on Wednesday recouped some of their losses to end the day firmer on Thursday. A significant shift was recorded in JSE listed miners which rose on the back of firmer metal commodity prices. Risks are still prevalent because of the Turkish crisis however, there was positive sentiment in the market today due to the potential meeting between China and the USA which could bring clarity on the trade disputes.

On the JSE, Exxaro Resources [JSE:EXX] was one of the day’s biggest gainers after the company released its half-year earnings results. Revenue and HEPS for the reported period recorded healthy increases and resultantly the stock jumped 7.99% to close at R140.00 per share. Metair’s [JSE:MTA] half-year results were also positive and subsequently the stock rose 13.38% to close at R15.93 per share. 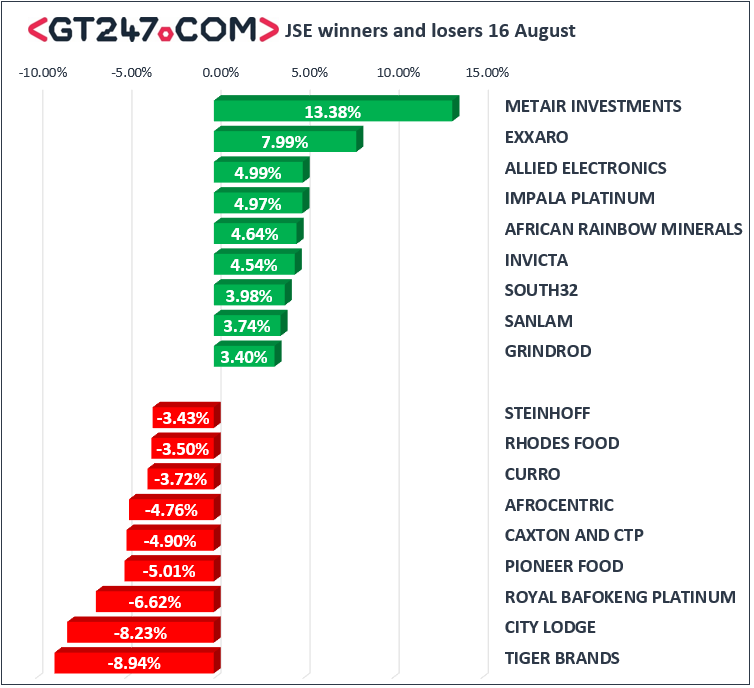 The JSE All-Share eventually ended the day up 1.65%, while the JSE Top-40 index climbed 1.8%. The Financials index posted gains of 2.29% to lead gains amongst the major indices. The Industrials and Resources indices gained 1.49% and 1.73% respectively.

Brent crude barely held on to its gains which saw it trading 0.03% firmer at $70.80/barrel just after the JSE close.