Stocks rally on the back of lower coronavirus death rate

The JSE rallied along with other global markets on Monday on the back of positive sentiment that there were lower reported coronavirus related deaths over the weekend from the main hotspots.

This gave some investors hope that this might be the first sign of the virus levelling off as health experts and governments battle to contain the virus. The local bourse started on the front foot as the positive momentum from the Hang Seng and the Nikkei which rallied 2.21% and 4.24% respectively, filtered through. The Shanghai Composite Index was closed for a holiday. Strong gains were recorded for all the major European benchmarks as well as the US indices. Global sentiment remains mostly bearish given weak economic data but any headlines on decreasing fatalities and monetary stimulus could potentially lift stocks on a session by session basis.

On the currency market, the rand started the day well above R19/$ as it reached a session low of R19.35/$. The weakness has been as a result of the further downgrade of South Africa’s sovereign rating to two notches below junk by Fitch ratings. However, the local unit found some traction in the afternoon session as it pared all losses and ultimately strengthened against the greenback. At 17.00 CAT, the rand was trading 1.79% firmer at R18.69/$. 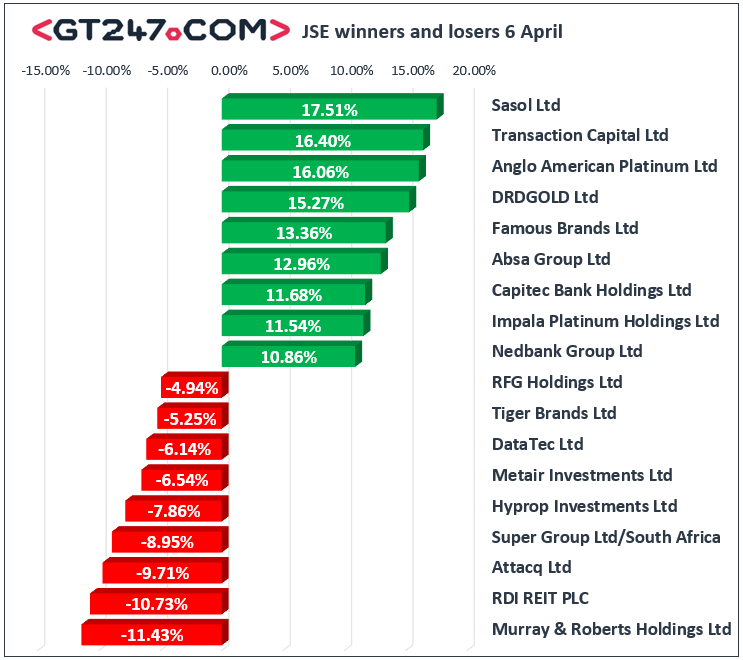 The JSE All-Share index eventually closed 3.68% higher while the blue-chip JSE Top-40 index gained 4.06%. The Resources index surged 5.01% while the Industrials and Financials advanced 2.65% and 5.63% respectively.

Brent crude started the week on the back-foot as it eased from Friday’s highs. The commodity was trading 4.13% lower at $32.70/barrel just after the JSE close.