Local stocks rallied on Tuesday on the back of strong upward momentum across most global markets.

Fears over the spread of the Wuhan coronavirus took a backseat in today’s session as investors found their risk appetite. The surge started off in China where the Shanghai Composite Index rallied 2.64% following significant pressure in the prior session. The Hang Seng and Nikkei rose 1.21% and 0.49% respectively. All the major equity bourses in Europe surged by more than a percent on average while US equity indices also opened significantly higher on the day.

On the JSE, Steinhoff International [JSE:SNH] rocketed 47.22% to close at R1.59 following the release of news stating that there was interest in the acquisition of one of its businesses called Cofel. The other retailers on the local bourse recorded gains primarily due to the stronger rand which saw gains being recorded for Massmart [JSE:MSM] which gained 2.77% to close at R55.00, as well as Pick n Pay [JSE:PIK] which added 2.16% to close at R66.17. Platinum miners also strengthened on the day which saw stocks such as Anglo American Platinum [JSE:AMS] gain 6.53% to close at R1252.72, as well as Impala Platinum [JSE:IMP] which rose 6.98% to end the day at R151.37. Despite a relatively modest full-year production report, Glencore [JSE:GLN] advanced 3.78% to close at R44.47, while pharmaceutical giant Aspen Pharmacare [JSE:APN] closed at R117.13 after adding 3.05%. Gains were also recorded for Naspers [JSE:NPN] which added 3.71% to close at R2588.25, as well as Remgro [JSE:REM] which climbed 2.54% to R186.63. 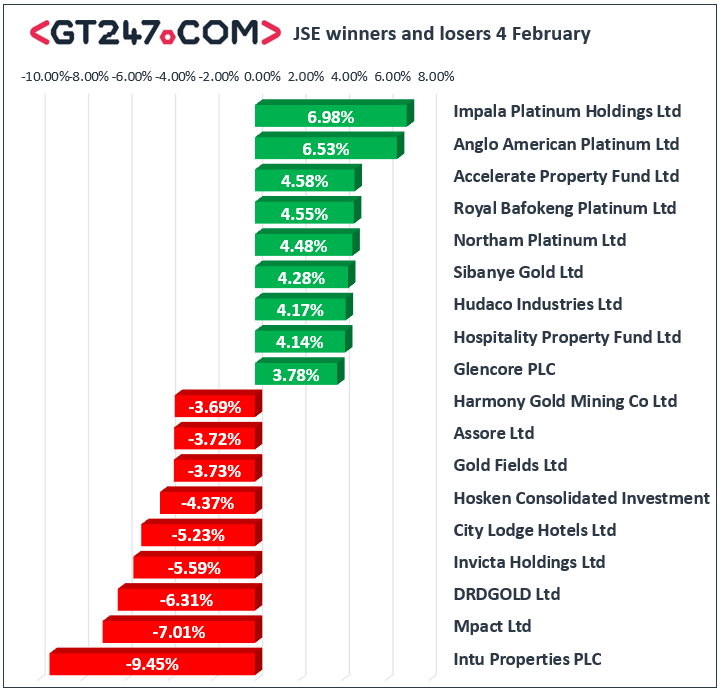 Intu Properties [JSE:ITU] slipped in today’s session as it fell 9.45% to close at R2.97, while Fortress REIT [JSE:FFB] lost 2% to close at R6.86. City Lodge Hotels [JSE:CLH] was weighed down by the release of a half-year trading statement which saw the stock drop 5.23% to close at R67.71. Gold miners struggled as weakness was recorded for Gold Fields [JSE:GFI] which lost 3.73% to close at R93.10, as well as for Harmony Gold [JSE:HAR] which retreated 3.69% to close at R47.28. Vodacom [JSE:VOD] also retreated despite reporting decent increases in revenue its quarterly trading statement. The stock eventually closed 1.03% weaker at R116.32.

Brent crude found some reprieve in today’s session as it was recorded trading 0.94% firmer at $54.69/barrel just after the JSE close.