The JSE fell on Tuesday following heavy losses in Asia which were mainly attributed to worries about a deadly virus in China.

The JSE fell on Tuesday following heavy losses in Asia which were mainly attributed to worries about a deadly virus in China.

The Hang Seng slumped 2.81% while the Shanghai Composite Index fell 1.71%. The Japanese Nikkei lost a more respectable 0.91%. The trend carried on to Europe where all the major benchmarks came under pressure, while US equity futures also slipped ahead of the cash market open following a holiday on Monday. Safe-haven assets attracted most of the inflows on the day as investors sort some safety given the current uncertainty on the extent of the virus.

The rand opened trading marginally softer as it weakened to a session low of R14.59/$. The local unit advanced in the afternoon session as the US dollar weakened against a basket of major currencies. At 17.00 CAT, the rand was trading 0.02% firmer at R14.48/$. 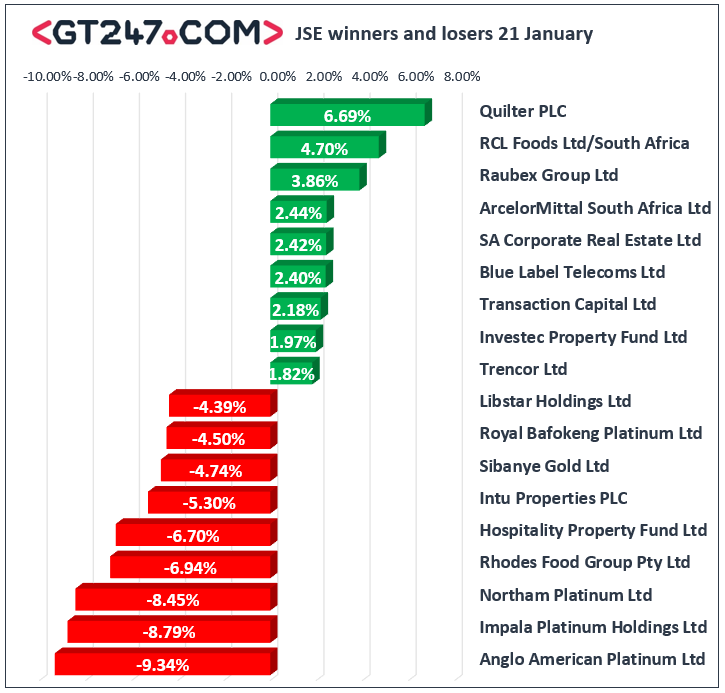 The JSE Top-40 index closed 1.52% lower while the broader JSE All-Share index lost 1.48%. All the major indices closed softer with the Financials index losing the small gains it had right before the close, as it lost 0.22% on the day. The Industrials and Resources indices fell 1.42% and 2.53% respectively.

Brent crude was trading mostly softer on the day and it was recorded trading 0.78% weaker at $64.69/barrel just after the JSE close.