Stocks mixed ahead of US Fed decision

The JSE recorded a relatively mixed trading session on Wednesday as it struggled for momentum ahead of the US Fed’s interest rate decision.

The South African benchmark 10-year Treasury yield pointed lower to reach a session low of 8.180% while the rand traded mostly flat against the US dollar. US Treasuries also slipped along with other major global Treasury bond yield benchmarks. With the US Fed expected to strike a more dovish tone in its latest policy statement, yields are falling on the back of bets that the Fed could cut rates at its next policy meeting in July. Initial estimates suggest that the Fed will leave rates unchanged at 2.50% on Wednesday.

Locally, Statistics SA released South Africa’s inflation data for the month of May. CPI YoY was recorded at 4.5% which was marginally higher than the prior recording of 4.4% but well within the SARB’s target range of between of 3% and 6%. CPI MoM slowed down to 0.3% from a prior recording of 0.6%. The was limited reaction to this data in the rand which remained range bound between R14.46/$ and R14.58/$ for the duration of today’s session. At 17.00 CAT, the rand was trading 0.11% weaker at R14.52/$. 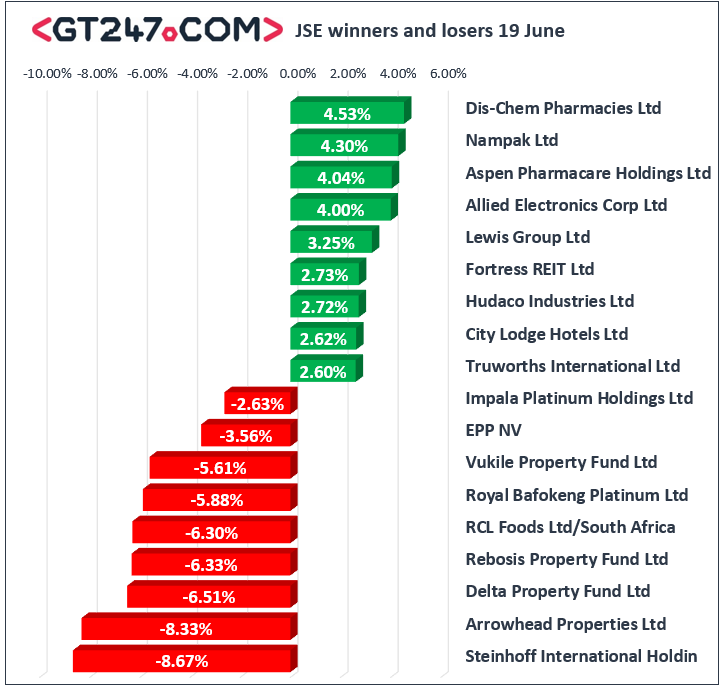 The JSE All-Share index eventually closed 0.13% lower while the blue-chip JSE Top-40 index dropped 0.11%. The Financials recorded another buoyant session as it climbed 1.29%, however the Resources and Industrials lost 0.62% and 0.38% respectively.

Brent crude was steady in today’s session following the prior session’s surge. The commodity was trading 0.1% firmer at $62.17/barrel just after the JSE close.