The JSE closed mildly firmer on Thursday as it tracked other global markets higher on the back of the signing of the phase one trade deal between the USA and China.

Locally, focus was on the South African Reserve Bank which announced its interest rate decision today. The MPC decided to cut the repo rate by 25 basis points from 6.50% to 6.25% as the central bank highlighted that the risks to economic growth are increasing. There was disappointment recorded for South African mining production as indicated by data released by Statistics SA. Mining production YoY for the month of November contracted 3.1% which was much worse than the forecasted contraction of 0.2%. Mining production MoM was recorded at -3.5% from a prior recording of 1.0%.

The rand fluctuated around the time the SARB governor was delivering the MPC statement. The local unit slipped to a session low of R14.44/$ after having peaked at a session high of R14.35/$ in earlier trading. At 17.00 CAT, the rand was trading 0.28% weaker at R14.41/$. 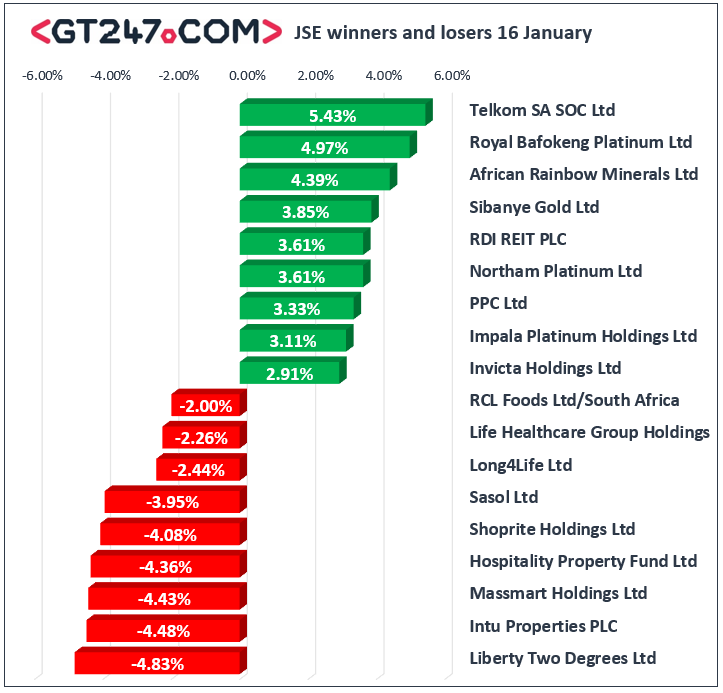 The JSE Top-40 index eventually closed 0.25% firmer while the JSE All-Share index managed to gain 0.26%. The Resources index was the only major index to record gains as it climbed 1.16%. The Financials and Industrials indices lost 0.04% and 0.2% respectively.

Brent crude recovered most of its overnight losses as it traded mostly firmer on the day. It was recorded trading1.03% firmer at $64.61/barrel just after the JSE close.