Stocks close firmer to mark the end of red October

The Chinese mainland equity benchmark rose despite a decline in the Non-Manufacturing and Manufacturing PMI numbers recorded in the numbers released early on Wednesday morning. In Shanghai, the main index closed 1.4% firmer, while the Hang Seng and Nikkei gained 1.6% and 2.16% respectively. In Europe, the upward trend was similar as all the major indices were trading in the green. US markets were buoyed by better than expected profit margins out of giants, Facebook and General Motors. 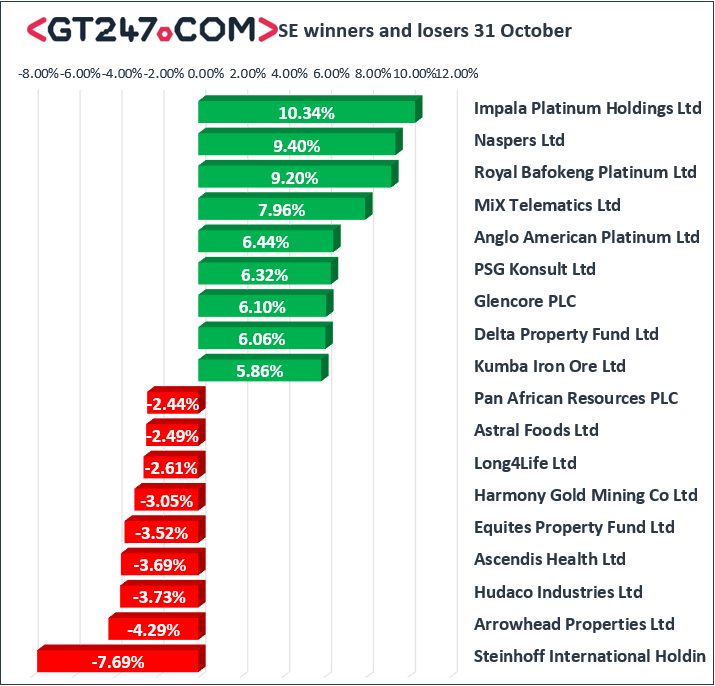 The JSE All-Share index eventually closed 3.22% higher, while the JSE Top-40 index gained 3.61%. the Industrials recorded one of its biggest intra-day gains after it jumped 4.4%, while the Resources and Financials indices gained 3.99% and 0.43% respectively.

The rand buckled as the US dollar extended its gains. The local currency fell to a session low of R14.85 against the greenback before it was recorded trading 0.47% weaker at R14.79/$ at 17.00 CAT.

Brent crude fell to a session low of $75.42/barrel before it retraced to trade at $75.77/barrel just after the JSE close.