Stocks close firmer ahead of US rate decision

The JSE closed firmer on Wednesday mainly on the back of a mild rally in financials and gold miners.

Sentiment across global markets was rather tentative ahead of the US Fed rate decision which is slated for announcement at 2100 CAT on Wednesday. Asian equities traded fairly mixed with the Hang Seng managing to record minor gains while the Nikkei and Shanghai Composite Index dipped. In Europe, equity benchmarks gained momentum during the course of the day after a flat start. US equity futures were also trading firmer before the cash market opened which pointed to a firmer open on the 3 major indices.

The greenback was softer against a basket of major currencies which gave room for the rand to strengthen to a session high of R14.11/$. However, some volatility is expected when the Fed announces its rate decision which could likely lead to US dollar strength should there be a rate hike. At 17.00 CAT, the rand was up 1.43% to trade at R14.13/$. 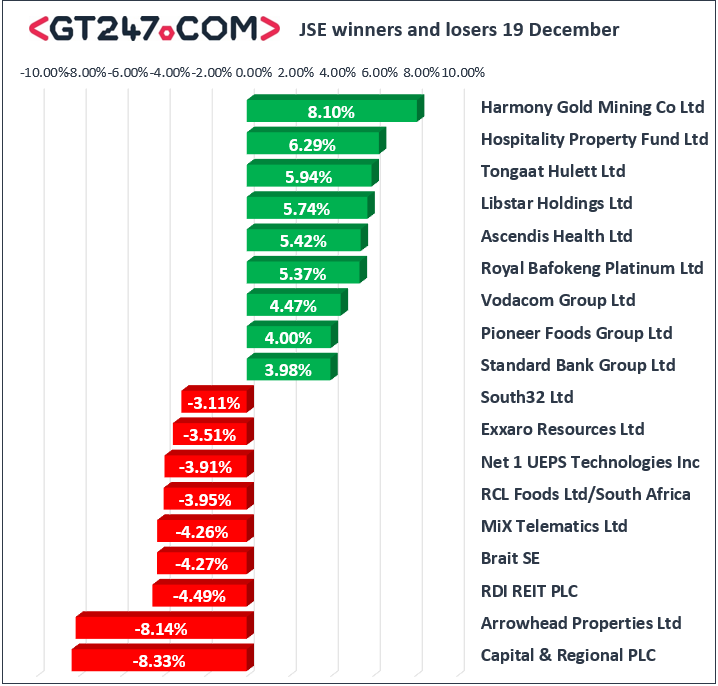 The JSE Top-40 index held to its gains to close 0.63% higher, while the broader JSE All-Share index firmed by 0.61%. The Industrials index rallied towards the close to end the day 0.21% firmer, while the Financials and Resources indices rose 1.94% and 0.33% respectively.

A volatile session ensued for brent crude as it swung between gains and losses. After falling to a session low of $56.04/barrel, the commodity was trading 1.3% firmer at $56.99/barrel just after the JSE close.