Global stocks fell on Friday following surprise reports that Donald Trump would be increasing tariffs on US$300 billion worth of Chinese imports into the USA.

This news shuddered any hopes of a truce between the world’s two largest economies which have not been able to come to an amicable solution with regards to trade between them. The Hang Seng plummeted 2.35% on Friday while in mainland China, the Shanghai Composite Index lost 1.47%. The Nikkei also recorded substantial losses as it fell 2.11%. Stocks in Europe traded significantly weaker on the day, while in the USA the S&P500 index is set to close lower for a 5th consecutive session after it opened lower on Friday.

In the USA, the non-farm payrolls numbers for July came in mostly in line with expectations however the downward momentum from the additional 10% tariff announcement usurped any reaction to this jobs data. The jobs data released today stated a solid case for the current strength of the US economy.

The US dollar has continued to advance against a basket of major currencies over the past week and it surged even further today. The rand continues to bear the brunt of this move in conjunction with the announcement of an increase in SA treasury bond issuance. The local currency slipped to a session low of R14.75/$ before it was recorded trading 0.73% lower at R14.75/$ at 17.00 CAT. 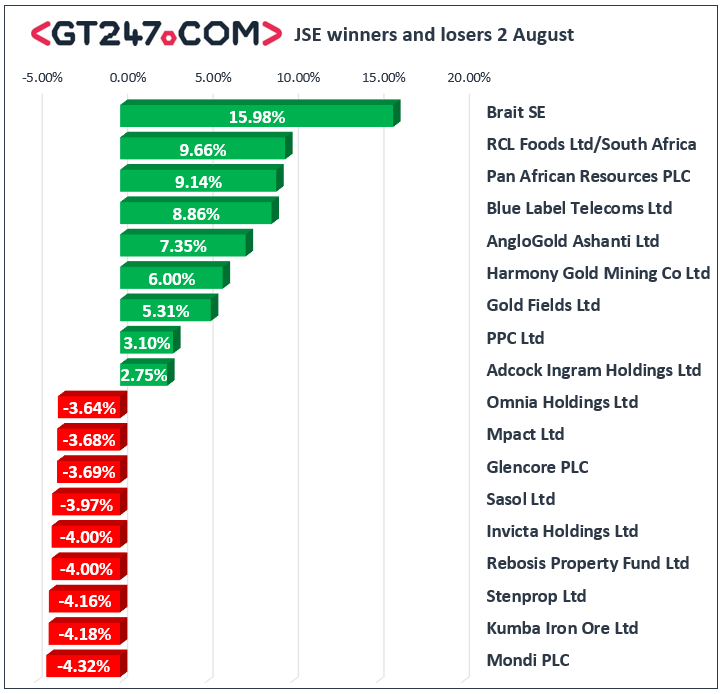 The JSE All-Share index closed 1.84% lower while the blue-chip JSE Top-40 index lost 1.95%. It was another tough session for all the major indices on the JSE with the Industrials coming under the most pressure as it fell 2.25%. The Resources and Financials indices lost 1.79% and 1.32% respectively.

Brent crude recovered from its overnight slump to surge on Friday. It was trading 2.93% firmer at $62.29/barrel just after the JSE close.