The JSE tracked other global markets lower on Thursday as investors increasingly became wary that a deal wouldn’t be reached before Friday’s deadline for tariff hikes.

In Asia, stocks in mainland China are closer to retesting two-month lows as the Shanghai Composite Index fell 1.85% while in Hong Kong, the Hang Seng lost 2.39%. In Japan, the Nikkei lost 0.93%. In Europe, automakers led the weakness across most of the blue-chips as all the major indices traded weaker. In the USA, the Dow Jones and S&P500 also opened significantly weaker as investors shrugged off riskier assets for safe-havens.

On the currency market, the US dollar continued to retreat from its recent highs as the 3-month and 10-year US Treasury yields’ spread narrowed as little as 6 basis points on Wednesday. This did well for emerging market currencies such as the rand which strengthened to a session high of R14.30/$ before it weakened sharply to trade 0.52% weaker at R14.43/$ at 17.00 CAT. 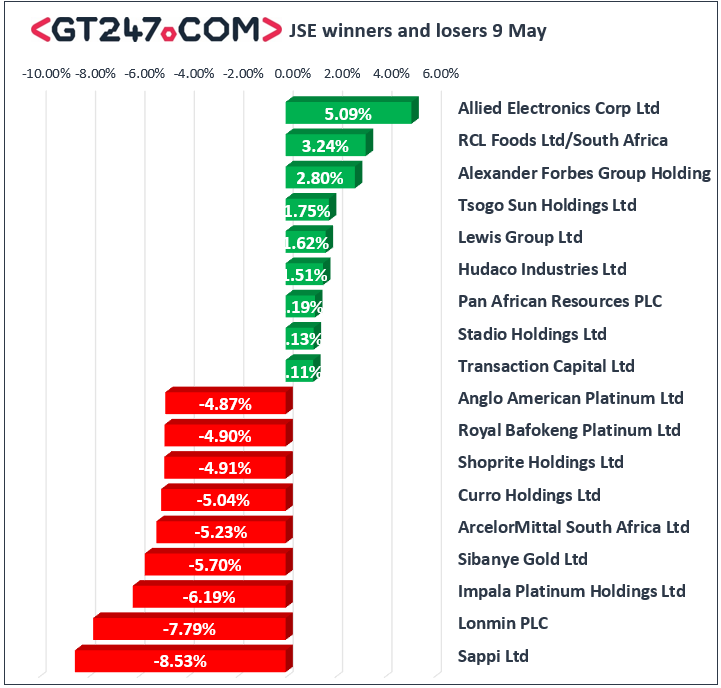 The JSE All-Share index dropped even further towards the close eventually closing 2.5% lower while the JSE Top-40 index dropped 2.62%. Another downtrend session ensued for all the major indices as they all closed weaker. The Industrials index lost 2.63%, Financials fell 2.59%, and Resources slumped 2.7%.

More weakness was recorded for brent crude which was trading 0.97% weaker at $69.69/barrel just after the JSE close.