Steinhoff recoups some of it's previous losses 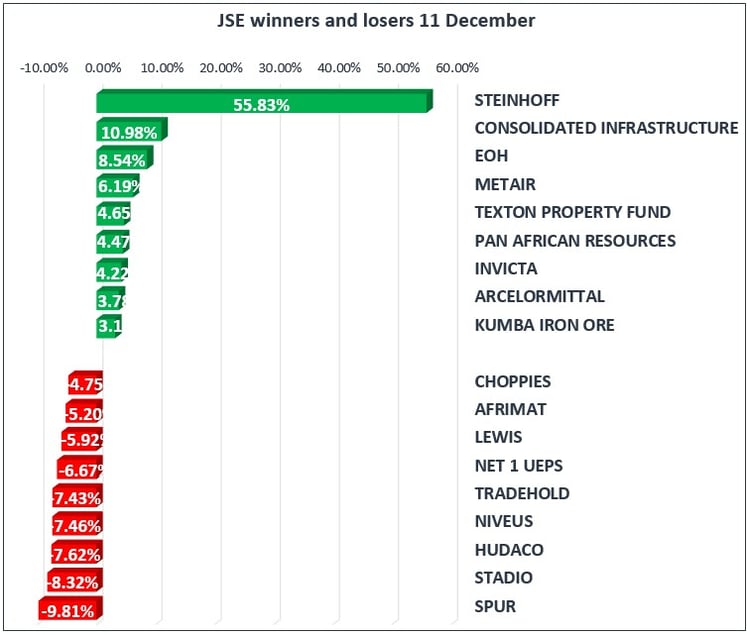 With five days to go before the African National Congress delegates gather to pick President Jacob Zuma successor, we saw the rand strengthen by 1.02% to R13.58 to the dollar. The market continues to watch Steinhoff International Holdings N.V. [JSE:SNH] as today we saw the company recoup some of the losses from last week, gaining 55.83% after the company released two SENS announcements detailing the steps they have taken to bolster the governance of the group.

Our local market closed marginally down with the All-Share index in the red, down 0.03% whilst the Top40 Tradeable managed to gain 0.08% on the day. Financials were the big losers down by more than a percent, industrials were down by 0.40% while resource stocks rallied by 1.27% with gold miners closing up 1.47%.

Meanwhile most precious metals were trading weaker with the gold price down 2.21%, trading at $1248/ounce, platinum down 0.23%, at 889.48/ounce. Brent crude erased early loses trading at $63.88/bbl but remains under pressure from concerns around oversupply with increased U.S. shale output.

Global stocks rallied off the back of the positive jobs numbers out of the US, seeing the Asian markets close positive while the European and US markets edged higher as we look towards the monetary policy meetings from the FED, ECB and BoE later this week.

After Friday’s deal there is a renewed sense of optimism around the Brexit process as Theresa May secured the endorsement from the European Commission. Talks will now progress to the much-anticipated trade discussions should the European Council accept the endorsement. However, as negotiations continue May faces internal pressure from Boris Johnson and Michael Gove to pursue a “hard” Brexit, where after a transition period the U.K. will be able to divulge from the E.U. laws.

Today was an important milestone for bitcoin’s shift from the peripheries of finance toward the mainstream. We saw the bitcoin futures surge on debut, jumping more than 26% and triggering two temporary pauses in trading designed to calm the market. This year we have seen demand for Bitcoin grow by around 1600% from the $1,000 we saw in the beginning of the year.