State Owned Enterprises (SOEs), new (but old) political leaders and Eskom’s new CEO are some of the headlines dominating on the local scene.

On the economic news front, we have local Consumer Price Index (CPI) data expected today and the main event on Thursday which is the Interest Rate decision.

On the international front we have the U.S. Federal Reserve's Federal Open Market Committee (FOMC) meeting minutes scheduled to be released at 21:00 SAST.

The Rand (ZAR) stood firm despite all the political news and gained momentum against the U.S Dollar (USD). This was mainly as trade negotiations made the rounds again and the losses some ground against other currencies.

The USDZAR currency pair is still above the 14.67 support level which has become a focal point over the last couple of weeks. We might expect some volatility on the currency pair this week with the FOMC meeting minutes later tonight, ongoing U.S-China trade negotiations. 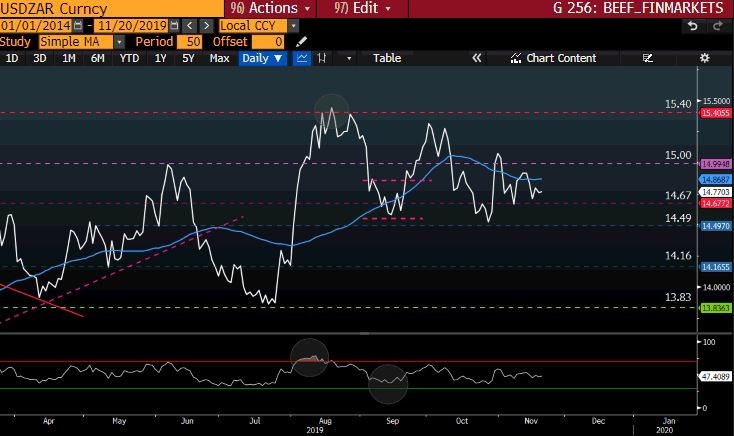 Inflation (CPI) data surprised to the down side this morning with inflation numbers dropping to its lowest level in 8years. CPI came in lower at 3.7% from September’s 4.1% which is still within the South African Reserve Bank (SARB) 's target range of 3-6 percent.

The South African Reserve Bank (SARB) 's monetary policy committee (MPC) will only announce the interest rate decisions tomorrow at 15:00 SAST. It is widely expected that SARB will leave the benchmark rate unchanged. There is a 33% chance that we might see a 25-basis point rate cut when looking at the forward rate agreements.

According to the Bloomberg survey, 12 out of the 14 economists surveyed expect the Repo rate to remain unchanged at 6.5%.

By looking at the broader market, we can see that the price action on the ALSI has finally broken out of the triangle price pattern. If the 50-day SMA holds up as support, then we might expect the price action to trend higher to the 52000-resistance level. 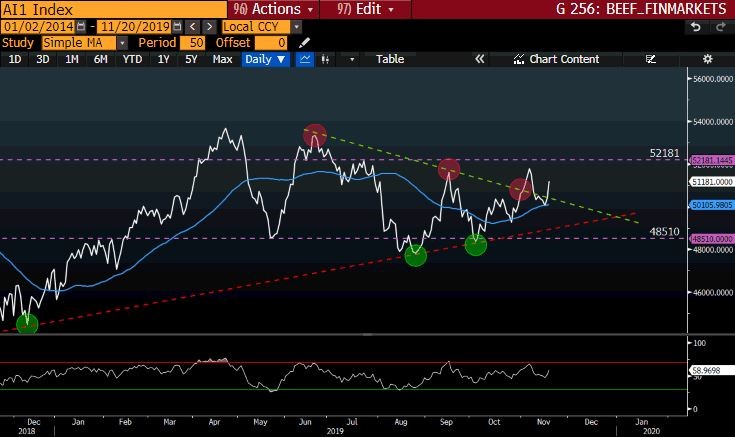