Small reprieve for the local bourse

The JSE traded mostly flat to firmer on Wednesday as it attempted to gain traction after consecutive sessions of losses.

The local bourse managed to open firmer and pointed mostly higher although the gains were modest. However, the all-share index started to lose some steam towards the close. The trend was similar to the Nikkei and the Hang Seng which held on to their gains to close 0.28% and 0.15% firmer, while the Shanghai Composite Index shed 0.41%. Stocks in Europe traded mostly firmer as well with gains also being relatively modest. US markets opened at record highs as they were supported by the release of better than expected US GDP data.

In terms of local economic data, the RMB/BER business confidence indicator rose to 26 in the 4th quarter of 2019, rebounding from the twenty-year low of 21 which was recorded in the 3rd quarter. The rand found some momentum as it strengthened against the greenback to peak at a session high of R14.69/$. At 17.00 CAT, the rand was trading 0.44% firmer at R14.73/$. 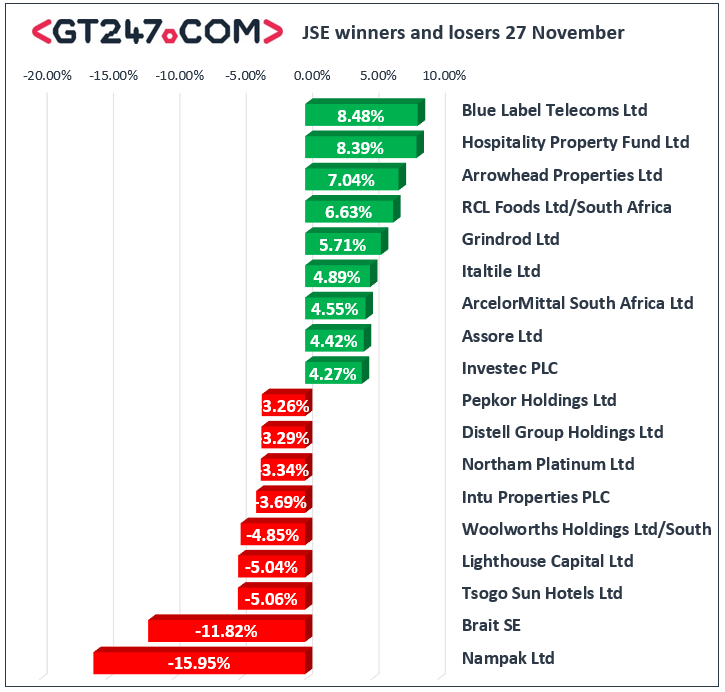 Nampak [JSE:NPK] released its full-year results which highlighted double-digit percentage point decreases in earnings as the trading statement released on Monday had guided. The share plummeted 15.95% to close at R5.27. Brait [JSE:BAT] also came under pressure following the release of its half-year results which showed a significant decrease in its net asset value. The share eventually closed 11.82% lower at R14.55. Woolworths [JSE:WHL] which released a trading update for the 20 weeks ending 17 November 2019 struggled as it fell 4.85% to close at R54.00. Other retailers also recorded declines on the day as declines were recorded for Shoprite [JSE:SHP] which lost 1.22% to close at R127.40, and the Foschini Group [JSE:TFG] which dropped 1.26% to close at R157.00. Losses were also recorded for Naspers [JSE:NPN] which retreated 1.26% to close at R2150.00, and Vodacom [JSE:VOD] which closed at R123.76 after losing 2.55%.

Brent crude struggled to build any significant momentum in today’s session. The commodity was recorded trading 0.03% firmer at $63.23/barrel just after the JSE close.