Global stocks including those on the JSE advanced on Monday following a week of extended declines which was induced by fears over the spread of the coronavirus.

The all-share index surged by more than 3% in earlier trading before relinquishing half of those gains as the session progressed. The reversal of gains was mainly triggered by the trend in US equity futures which pared earlier gains before swinging between and gains prior to the US spot market open. Major Asian indices advanced on Monday led by gains on the Shanghai Composite Index which gained 3.29%, while the Hang Seng and Nikkei added 0.62% and 0.95% respectively. In Europe, the major benchmarks traded moderately softer except for the FTSE 100 which advanced on the day.

The optimism was on the back of positive economic stimulus comments by officials from some of the world’s largest central banks. The US Fed hinted that it is open to rate cuts depending on the risks posed by the virus outbreak. Similar sentiments were also echoed by officials from Japan and the United Kingdom, thereby spurring the firmer open in trading to the week.

The rand which slipped last week along with other emerging market currencies found some momentum on Monday as it peaked at a session high of R15.45/$. At 17.00 CAT, the rand was trading 0.09% firmer at R15.64/$. 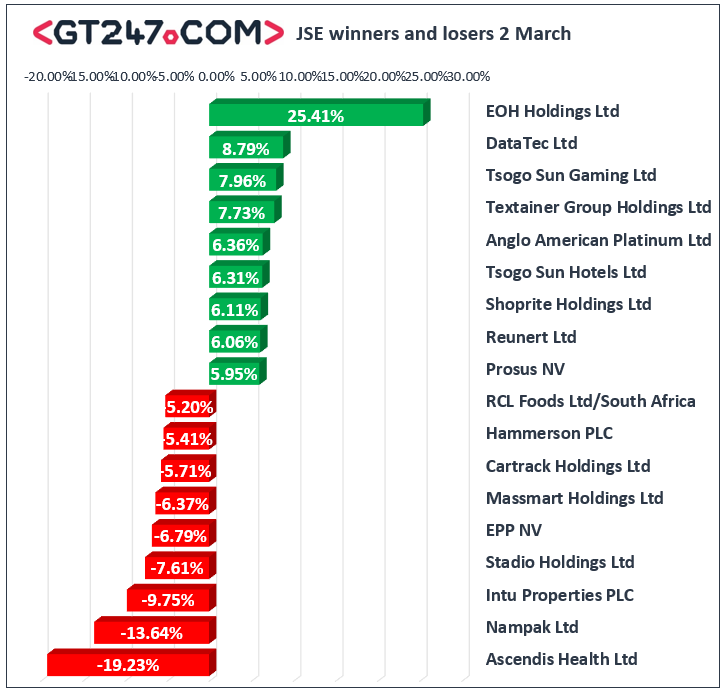 Brent crude managed to rise from its Friday lows as it was recorded trading 1.63% higher at $50.47/barrel just after the JSE close.